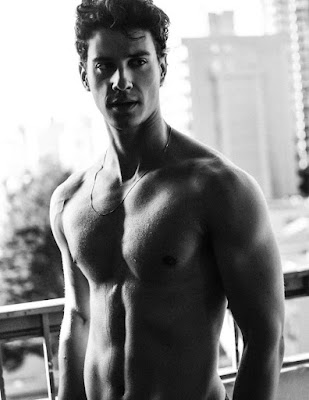 I keep hesitating to do individual posts for every cast announcement that the second season of The White Lotus drops because I have a feeling we'll be getting several of these in a short span of time as the series ramps up towards filming and so forth, and so we have -- last week we heard about Michael Imperioli and Aubrey Plaza, and today comes word of four more. But the chance to post the above photo of one of those names, an actor named Adam DiMarco, pushed me over the edge, for uhh extremely visible reasons. Previously seen on a bunch of shows I have never watched -- namely The Order on Netflix and The Magicians on SyFy -- THR in their announcement actually has details on the character he's playing, alongside details on who the other three actors announced today (F. Murray Abraham! Tom Hollander! Haley Lu f'ing Richardson!) will be playing, but I'll refrain from sharing in case y'all wanna go in fresh. I will spoil one thing -- the new season will apparently be filmed somewhere in Italy! Seriously so jealous that Mike White has figured out a way for paid vacations like this, while inviting men like Adam here along, but given all Mike White has gifted us with over the years it couldn't have happened to a more deserving fella. On that note below, from Mr. DiMarco's Instagram, I gift you some more content of note: