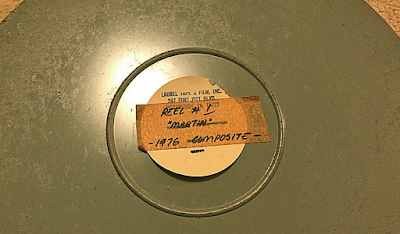 This is a lil' update to my post last week about George Romero's 1978 vampire classic Martin, which was part of my Halloween "Needles" series and wherein I told y'all that the film appeared to finally be getting an upgrade -- it turns out it's not just an upgrade, it's a whole damn 'nother thing altogether! Michael Gornick, who worked with Romero in several different capacities over the years, posted the above photo on Facebook two days ago, with this explanation:

"I simply can't say enough about the efforts of KEVIN KRIESS and THE LIVING DEAD MUSEUM in locating the seldom (if ever) seen, black and white, 16mm version of MARTIN. This "Director's Cut" of some three and a half hours in length was always Romero's preferred version. May it soon return safely to the custody of Richard Rubinstein and Braddock Associates for digital revitalization and distribution to the world. Note: This photo depicts Reel #1 of 3. The hand written label is one that I prepared back in 1976. To my knowledge, this is the only existing version of this Romero classic."

Twice as long and in black-and-white, wtf!!! The thing is the 4K upgrade I told you about last week was from Second Sight films and that appears to be a 4K upgrade of the original film -- as seen in the tweet down below the print is in color. So it looks like we're going to be getting extra lots of Martin in the future! Which is an earned righting of the film's history, over-looked and under-loved as it's been in the past. (via, thx Mac)