Pic of the Day Part II The Rizzening 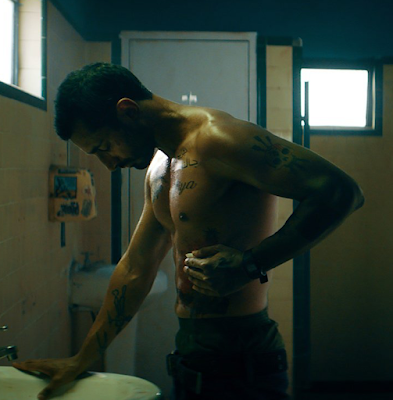 This still of Riz Ahmed in his forthcoming sic-fi-drama Encounter got dropped a couple of weeks ago apparently but I'll be damned if I saw it -- until today, of course, and here we are. I have actually already seen Encounter -- it played TIFF, and... it's fine? It's a riff on Invasion of the Body Snatchers, mixed up with a post-war PTSD custody drama, and Riz is good, the two kids who play his sons are good -- there's something I couldn't quite put my finger on missing and I was seeing so many damned movies at TIFF I didn't have the time to worry about it too much since I wasn't tasked with writing about this one. (I said all of this before right after the fest while sharing some lovely photos of Riz.) Anyway the full trailer for Encounter got dropped today -- the film's hitting some theaters on December 3rd and then then Amazon Prime a week later on the 10th -- so I will share that with you now!
Who? Jason Adams When? 5:11 PM
Labels: Anatomy IN a Scene, gratuitous, Riz Ahmed, TIFF, trailers