My Body's Floating Down the Muddy River 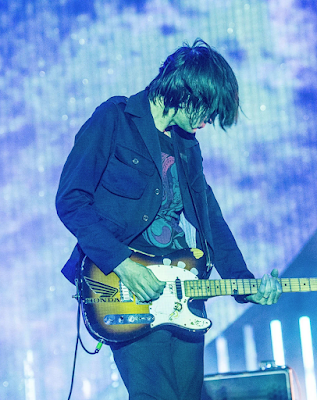 Big day for one of my all-time favorite people in the world -- it's the 50th birthday of genius, Radiohead guitarist, and movie composer Jonny Greenwood today! We wish him the happiest! But that's not all today is -- Pablo Larraín's movie Spencer, an absolutely fucking superb biopic of Princess Di starring Kristen Stewart giving one of her greatest performances to date, is out in theaters today, and that film (which I loved, clearly, and which I am really hoping to have a review of up in a bit) is aided immeasurably by Greenwood's tremendous score. If dude doesn't get an Oscar nomination this time I swear to the devil, AMPAS, I'll be coming for you all!

But wait, there's even fucking more! Also out today is Radiohead's KID A MNESIA, an anniversary bridge album celebrating the 20th-ish anniversaries of their two separate-but-conjoined masterpieces from 2000 and 2001 with the two albums smashed together for the first time along with TWELVE previously unreleased tracks. I was listening to the new tracks this morning and the new version of their song "Like Spinning Plates" literally made me burst into tears, it's so gorgeous. You can buy it here, or you can be a maniac like me and go to Radiohead's website and buy every single limited edition variation they have on there. Books! CDs! Cassette tapes! Multiple vinyls! I got it all coming goddammit! We all need something to love.