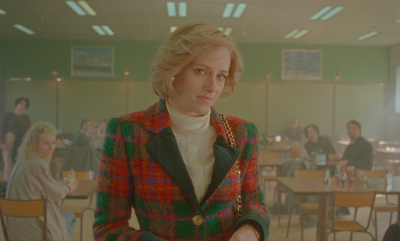 Spencer, Pablo Larrain's swooning, moving biopic of Diana Princess of Wales nee Diana Frances Spencer starring a possibly never better Kristen Stewart, is first and foremost a food movie. But the food, gorgeously and relentlessly shellacked, is a weapon -- taking its cue from Diana's well-known battle with an eating disorder, every eye on the entire globe carving her up front back and sideways, beautiful little cakes descend from its heavens as artillery fire. The film opens with the cooking staff cross-walking against a fleet of soldiers so this isn't exactly subtle messaging -- this is there to be consumed until you too are stuffed sick with it -- but it's effective, framing one woman's beleaguered swipes at an exhaustive menu as the only rebellion within reach. It's a war of frisée and cold soups, an endive apocalypse, and you should feel it in your belly.

The atmosphere, golden and green, book-cases and story-tall sconces, has a top haze about it -- like the party that concludes Sofia Coppola's Virgin Suicides you can feel the air in every corner of Larrain's frame, a blueish-greenish fog that hangs in the air and over every shimmering surface. The film stock has weight and presence, a material grain -- Stewart's Diana seems as lost in the memory-less mist as Nicole Kidman in The Others, fighting to find an exit in fields that stretch out forever. We see the castle where the Royals have come to Christmas from an aerial perspective early on and it's a maze of moats and nothingness in every direction -- ye age olde question of were those built to keep something out or something in bobs up from beneath the surface, eyeing us every chance. Scarecrows and ghosts linger in the trees and up on the hills -- this haunted nowhere place. 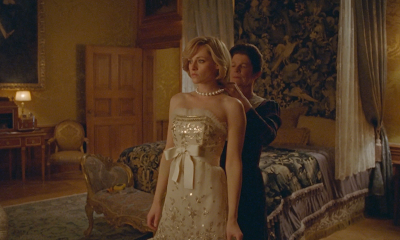 And so Di flits and frets and storms about, pressing sickly against the wall fixtures, breath heaving like golden ribboned panic attacks, a dinner mint of disillusionment to top off every meal, every pillow. Jonny Greenwood's gorgeously nauseating strings pluck and vibrate the pretty surfaces, pressing in -- the Queen Mother herself might start tilting to and fro like we're on a besieged Star Trek holo-deck set and it'd seem just right, just appropriate. This place isn't safe from the eyes to the ears to the knee-high Wellingtons stomping through the muck -- the birds, scenery and mastication fodder, blink dumbly at every confession, hearing and seeing nothing. Outside a cavalcade of shutters snap, riot sounds, gunfire, the emptiness as loaded as a gun.

And yet for all the horror happening to and from Diana, the woman herself, exhausted and self-sabotaging at every prance, is a beacon of light no matter how many hands come in from behind the curtains to dim her. There's an exquisite sequence near film's end where Stewart dances, a parade of costumes and smiles and free movement inside the confines of one or another corridor, thrusting forward a thing we all knew and loved about Diana -- she loved to dance -- that cuts the murk and depression off at its knees. Like the help and the awestruck people she renders stupid inside a restaurant at film's start there's so much truth and vibrancy given to our simple wish here, echoed out from history -- let the goddamned woman dance! This is a heist picture where it's her smile she's absconding -- she's stuffing her heart in her oversized pockets and smuggling it with the laundry. I rooted for escape, fresh air, a stretch of beach where one can scream freely, holding hands with a good and proper friend.

I hadn't given it much thought since childhood but Spencer brought me right back to that time when my own parents were divorcing, which happened to coincide with about the same time as Diana was loosing herself. I was really too young to realize it at the time, so the fact that my own mother and Diana had apparently become inexorably linked on some sort of buried emotional wavelength wasn't a thing I was thinking, not until the scenes here, where Stewart's Diana sweeps up her two sons in her arms and smothers them with manic distracted kisses, as much, possibly even more, for her own benefit -- an unwavering love in the face of otherwise oblivion -- than theirs. Diana's love hurts, is ill-mannered and chaotic-tinged, it leaves a mark -- a mark I recognized, could press my own finger to today. History's scars get spoken about by battlefields, but they're pressed in person to person, and Spencer understands the worst and best both cut us to ribbons. Best turn on a pop song and just fucking run while you can. 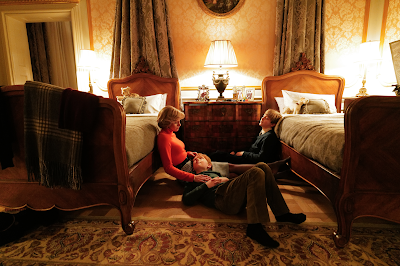