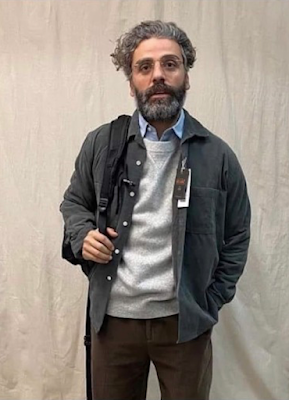 The Hot Professor vibes emanating off of that photo of Oscar Isaac are enough to shave decades off my life -- I'm Benjamin-Buttoning myself back to being the creep in the front row looking for stray bulges in m English TAs cords again right now and I like it, I like it! Ahem. Anyway that's not why we're here -- I mean that is why we're here on Planet Earth, there is no better reason for existence than everything I just wrote and posted. But this post exists specifically so I can share with you all the first teaser for Oscar's Marvel series The Moon Knight, which premiered over the weekend due to that Disney even thing that I otherwise paid no attention to.

I've posted about The Moon Knight a few times now -- this fight training video was a real highlight -- but I'm just gonna tell you upfront that I haven't watched the below teaser trailer yet and I have no intentions of ever watching it. I heard Oscar's going for some insane accent work, and the second I heard that I decided to wait for the show to premiere to discover it that way. I am edging myself on this shit! Anyway we don't have a specific release date for the series yet but Marvel nerds are theorizing it will come in February or March of 2022 because there's a gap in Marvel's schedule there.
Who? Jason Adams When? 12:31 PM
Labels: gratuitous, oscar isaac, trailers