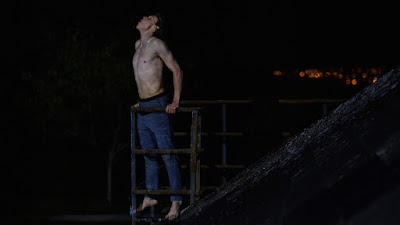 This movie was on my list of movies I wanted to see at TIFF last month, but they didn't end up screening it virtually for critics who didn't travel to Toronto and so I had to shave it off my list, scratch "TBD" into its place -- well the "D" is here with the trailer for Wolf arriving yesterday! No not that "D" pervs -- although George Mackay did give an interview where he mentioned being naked a lot for this movie, so I guess we'll see -- I just mean the "determined" part of "to be determined." That's been determined. Oh god is this day over yet? My sentences are no longer making sense to me.
Aaaanyway Wolf stars Mackay as a young man suffering from "Species Identity Disorder" (i.e. he believes himself a wolf), who gets sent to a clinic to be cured of his so-called delusions. But it looks like getting a bunch of similar-thinking people together might backfire? To be honest this trailer reminded me So Very Much of Park Chan-wook's oddly forgotten 2006 film I'm a Cyborg But That's OK, which had Lim Soo-jung as a young woman who believed herself to be a cyborg, who got sent to a clinic to be cured of her delusion, only to fall down the rabbit hole of delusions whilst around similarly-minded people (including pop star Rain, looking real good). Judging by this trailer Wolf could be the exact same movie, just with more naked George Mackay? I am okay with this.
Who? Jason Adams When? 4:45 PM
Labels: George Mackay, gratuitous, Park Chan-Wook, Rain, trailers