Chucky Lives To Die Another Day 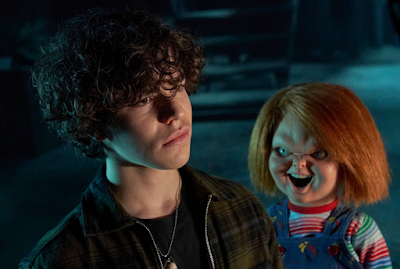 With the two big fall film festivals of TIFF and NYFF now nearly behind me (one more week of NYFF) I can feel my body preparing itself to move on to less-serious things, October-tinged things, spooky ooky lil' horror things -- which makes it perfect timing for the trailer for the new Chucky series to arrive! This will be the perfect brain cleanser! Like Drano! I mean that in a good way! The series premieres on SyFy and USA on October 12th at 10pm and the person who matters -- Chucky creator and gay icon Don Mancini -- is behind the thing, so there's absolutely no reason to stay away (like there was with the remake, I mean). And Mancini has promised thins thing will be very very queer, just like the series ended up eventually becoming -- we're so there!
Who? Jason Adams When? 4:25 PM
Labels: horror, trailers