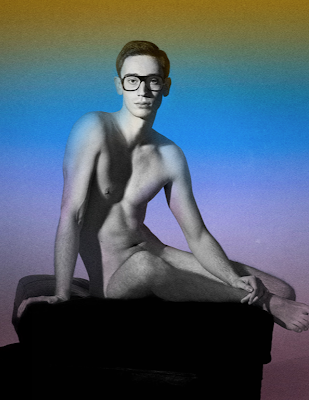 Thanks to MNPP reader and pal Boyd for shooting us this photo -- Quebecois actor and delightful weirdo Théodore Pellerin is starring in a play in Montreal called Embrasse next month, and one of the promotional images has him reenacting the famous nude pose of the designer Yves Saint Laurent -- this is how you get audiences to go see your plays, people. According to our pal Boyd (I don't know French so the website's indecipherable to me) the play was written by Michel Marc Bouchard, who wrote Xavier Dolan's best film Tom at the Farm, and is about a young man who dreams of being a fashion designer. (The Dolan connection is interesting given the rumors that Pellerin is dating former Dolan star François Arnaud.)

Okay so I’ve become slightly obsessed with this rumor that Arnaud & Pellerin are an item (and it’s been repeated by another source since) and now today their Instagram posts really seem to have them in the same place! Could it actually be??? pic.twitter.com/Ln869KQj2I

(That rumor is my current Quebecois obsession.) Anyway it looks like the fine folks at Netflix have also discovered Pellerin, who first caught MNPP's eye thanks to his stellar turn in the cruelly brief single season of the series On Becoming a God In Central Florida (RIP to my beautiful baby) -- Pellerin had been around for a minute before that series, I know some of you were familiar with some of his earlier work, but I was not. Then he was in several things all of a sudden -- the two films Boy Erased and Never Rarely Sometimes Always foremost -- and we were quick finding ourselves smitten. Well Netflix did too it seems, as he's in two big projects for them right now (neither of which I've seen yet) -- the series Maid with Margaret Qualley and her mom that Andie Macdowell person, and the fright film There's Someone Inside Your House, which just premiered today. Let's hope this is just the start of a beautiful friendship!

He is so HOT in that nerdy kinda way. I don't even care if he's gay or not, just want him to have a long career with lots of good roles and plentiful nudity.