I Came For C'mon 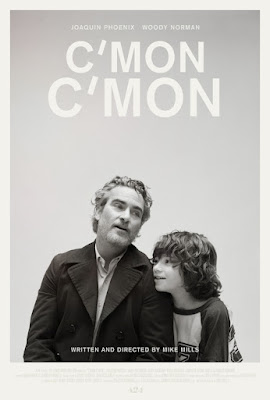 I am suddenly relieved that I didn't post all of the C'mon C'mon posters when they first dropped last month -- A24 released a whole series, each with a similar shot of the film's two leading men Joaquin Phoenix & Woody Norman goofing about -- because now I have food to feed multiple posts on the film, which will be inevitable given its excellence. Not that anybody here is surprised -- this is a Mike Mills joint after all, and the man who made Beginners and 20th Century Women (not to mention who is partnered with Miranda July) is on a damn roll. My point is I reviewed C'mon C'mon this morning at The Film Experience, click on over to read my thoughts. Or wait until the movie is out on November 19th, and read it once you've seen the film -- that works as well. I will surely remind you. Here is the trailer in case you missed that. Good good good movie, you guys.
Who? Jason Adams When? 10:34 AM