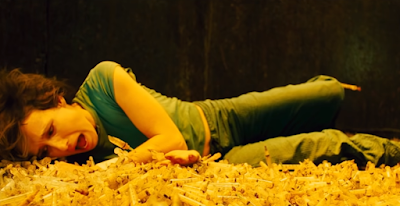 Although I have made this clear on any and every occasion when the Saw films have come up I do want to again reiterate here -- I fucking hate the Saw movies. And it's not because they're gruesome -- I can deal with gruesome. It's not because they're mean-spirited -- I can deal with mean-spirited. And it's not because they are cheap trash -- I love plenty my share of cheap trash. But the combination of those three things added to their incoherent moralism, well this is a recipe I cannot stomach. When movies think they have things to say, and present themselves as such, but the things they're saying are at complete odss with one another, a jumble of preachy hypocrisy, I get fed up real fast.

I suppose that's part of my problem with the just-released Halloween Kills (my review here) -- David Gordon Green's film seems to think it has a message about mob mentalities and vigilantism and trauma but when it's not being so basic it's stating its intentions in the blandest form of text ("We are all the monster now.") it's actually making a movie that undercuts its own half-baked thoughts at every turn, until nothing it's doing means anything, and yet you can sense the filmmaker leaning back in their chair, smug, expecting my mind to be blown, brah. Oh my mind is blown, David, but for not the reasons you think! 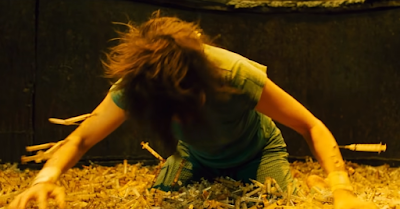 Sorry I don't know why I am talking about HK again -- besides the fact that I have spent all week seeing people who should know better trying to defend it, and yet all of their defenses are "Well there have been worse Halloween movies," or "You like some shitty movies, lighten up," and yet their defenses of the movie are all like, "Yeah it's a mess but it like thinks things... but when it doesn't it's like killing and stuff." People really want to have it both ways and yet I've not seen a single case made that states why Halloween Kills presents a coherent case for anything it's flailing around at wildly. I'm supposed to wait for he next movie, apparently. Y'all do that then, and I'm gonna talk about the movie that's here right now if that's alright.

Okay so Saw! Saw 2, in particular. I don't know why I saw the second Saw movie in the theater when I thought, and continue to think, that the first Saw film is one of the steamiest piles of shit that's ever gotten big success in the history of movies, but I did. I believe I stopped seeing the films altogether after the third one -- what can I say, I was young and would go see any horror film to be part of the conversation. Then again I did see the also godawful Spiral: From the Book of Saw last year, so clearly I have learned nothing. Anyway I saw Saw 2 in the theater and the infamous "Needle Pit" sequence did admittedly stick (heh) in my brain, and when I thought of this year's "Needle" theme I knew I had to include this one, even though it's typical of the repulsive pablum that this franchise deals in, which mistakes sadism for profundity. "Get it, man? She's a recovering addict, man! Now she's on a bed of needles, and shit! Gnarly!" It's so deep, I know, I just can't possibly wrap my head around it.

Have you watched “American Rust”? Neustadter and Álvarez are cities with nice bodies, although Alvarez’s intimate scene was a bit uncomfortable to watch.

Regarding your Halloween Kills travails, maybe if you weren't so hellbent on yucking everyone's yum, everyone would be having a different reaction. You seem like someone who, when he really likes something (e.g., Call Me by Your Name) wants everyone else to adore it. When you don't like something, you apparently expect something similar. Did someone appoint you to resolve public opinion on Halloween Kills? Regardless, I would expect people to be annoyed by your yum yucking for at least a while longer.

Anon - all I'm asking for is somebody for who likes HK to make a convincing argument for why it's not a piece of shit. All the defenses of it I've seen have been as incoherent as the film. If people don't want to that's their prerogative too -- as I tweeted yesterday it's fine for y'all to like your trash, I like plenty. But the arguments I've seen for this movie have been entirely at odds even within themselves. If one person could make a good case, even an interesting case, about the movie saying something interesting even through its muddle, I wouldn't be so annoyed. Anyway I am clearly not "appointed" anything, I am just ranting on my personal website, where I think I convince very few of very few things, so maybe don't take it so personally when I get worked up about some dumb thing for a few days.

Yes, my message is the one that reads “taking this personally” - my apologies.

You just have feigned confusion to others’ responses, and I mean only to point out that yum-yucking often meets with such responses.

As for a cogent defense — I found the commentary on the futility of a mob mentality to be interesting, I like many of the characters, i have a reservoir of goodwill from the last movie, and I was left intrigued by the possibilities for a third installment re the mob point. i also like the idea that MM is after anyone who has seen him (i.e., cemetery caretaker from last movie) — fun idea. Oh, and I’m easy and know that there is plenty of stuff legitimately worth the venom. I doubt this would satisfy, though.

HK is a crap movie, I agree.