I'm in a terrible funk mood-wise today, and it's affecting my ability to write. So I'm right now forcing my hand here in order to get the blood pumping from my brain down to my fingers, so I stop sulking slash googling pictures of Oscar Isaac to distract me from my sulk and just fucking write something -- that is to say I am right now going to spill quick thoughts on five movies I watched from the Toronto Film Festival that I won't otherwise be reviewing.

I ended up seeing 42 movies at TIFF over the course of a couple of weeks, which is ridiculously too too much, but I can't seem to stop myself -- I work myself into a fever pitch convinced the world will realize I don't deserve access to anything and that they'll rescind it at any moment, and so for this immediate small window of time where I have them fooled I must grab everything I can.

Oh christ I'm sulking again. Anyway point being I'll never write about all 42 films -- especially since NYFF has now begun -- and I've only written about 6 so far, so I should get out some thoughts while I still can think thoughts. Which, I warn you, I sort of can't -- I don't make any promises that anything you're about to read will be "interesting" or "coherent" -- I am simply forcing myself to type right now, so I stop emotionally spiraling. We'll see what happens! What a thrill for everybody involved! 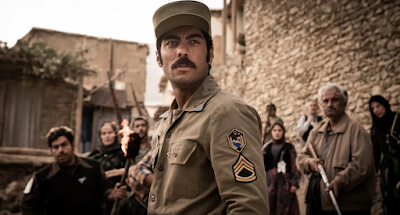 Zalava -- Set in a small Iranian village on the precipice of the revolution Zalava sets a literal-minded police officer who's hated by the townspeople against a con-artist exorcist who has everybody convinced only he can save them from the evil spirits in their midst. It's basically the angry mob scenes from any Frankenstein or Beauty of the Beast film writ large, and it packs a hell of a gut punch on the subject of mass hysteria -- as we've learned over the past couple of years it's our next door neighbors who turns out are way scarier than any invisible forces, and who are more than happy to keep believing in nonsense that comforts their way of out-of-date thinking even as said continued belief drives us all straight into the ground. It's timely and scary and it should also be said that leading man Navid Pourfaraj is a hottie with a superior stache. 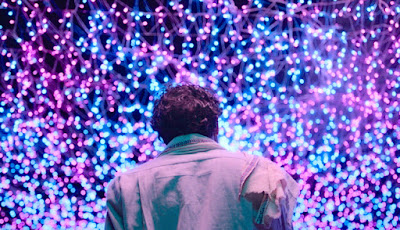 Dug Dug -- Recurring themes from all sorts of angles at TIFF, as this is also a movie about great crowds of people deluding themselves into believing whatever the hell they want to, common sense be damned, but Dug Dug goes at it from more of a satirical, funny bent -- an alcoholic good-time boy named Thakur goes for a drunken joyride on his scooter one night and before you can say "watch out for that bus" gets run over and killed by a bus. And then after some inexplicable post-demise shenanigans involving his scooter the entire village becomes convinced Thakur's spirit lingers and before you know it every business in town is named for him and a new religion's been born. My read of the film probably leans slightly harder into a cynical view than the filmmaker intended since I view everything having to do with religion cynically but I saw this as a delightful evisceration of the nonsense that is religion, and as such adored it. Fantastic editing too -- the sequences where we watch religion spread like a bad dollar bill are propulsive. 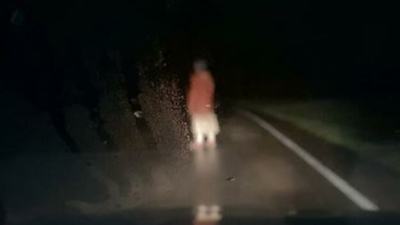 DASHCAM -- I promised myself I wasn't even going to review this movie because of how much I fucking hated this movie and how little attention it actually deserves, but I just want to go on the record briefly that this film is confused trash that platforms a real-life anti-vax maniac and then begs us to love her for her endless insufferable dick jokes. No thank you! No thank you, director Rob Savage! I don't care if Host was a fun treat at the start of this pandemic -- and it was, here is my review -- you haven't earned a free pass for this bullshit. The lead's ability to come up with things that rhyme with "cum" at the drop of a hat is funny for exactly point two seconds and yet this movie treats her as if she's this Rain Man comedy savant, and then every supposed scare is dropped into a blender of loud braying nonsense. Just fuck this irresponsible garbage. Pass! 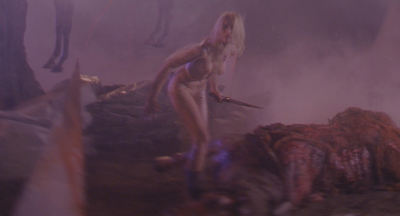 After Blue: Dirty Paradise -- I have been meaning to watch writer-director Bertrand Mandico's previous feature, 2017's The Wild Boys, for ages... well since 2017 I guess. If that consists of "ages." And since I said that it's clearly the truth. Ages, then! Anyway yet even though I haven't seen that movie yet I still recognized After Blue as being Mandico's movie, just from the stills I have seen from The Wild Boys. Which is super weird! Mandico clearly has a recognizable style already set -- one that's clearly borrowing from people like James Bidgood  (director of Pink Narcissus) or Kenneth Anger, and then people who borrowed from Bidgood like Pierre et Gilles -- but I like that style so it's okay, borrow away. Anyway this was one of the last films I watched at TIFF and I think I was so totally exhausted by movies trying to have a "plot" or trying to make "sense" that After Blue totally charmed me, in that it didn't ask me to follow it; it was just a wacko experience, a stylish psychosis to luxuriate in. I really dug it. It's like Barbarella on ketamine. I assure you that you will have to be in the exact right mood for this, and that being under the influence of something, anything, will probably help. That said I wasn't on anything, except maybe extreme fatigue, and it worked for me, so. 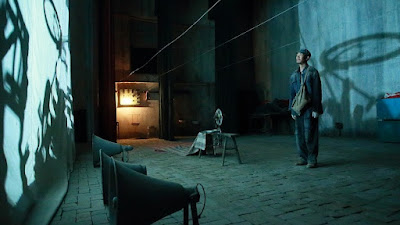 One Second -- I am sure that every person who's reviewed this movie from Chinese legend Zhang Yimou has referred to it as "a love letter to cinema" and it totally is, except when it isn't. What's fascinating about One Second is the ways it understands the goods and the bads of what cinema is capable of, from the inside out -- what's most interesting about One Second are the moments where its ambiguity shines through. Not even getting into the Chinese propaganda thing at this movie's heart -- One Second got reworked by Chinese censors because of the things I just mentioned -- if you think about the history of the movies here in the US you should also feel that ambiguity; think about the ways the movies, thanks to things like the Hayes Code, have brainwashed entire generations into believing a form of history that's emphatically not true. That gay people didn't exist in the past. That people in the 1930s didn't swear or have sex. The movies have inalterably skewed reality itself. We should, alongside all our love of this art-form, be aware of its boundless possibilities for corruption! Zhang Yimou's movie, through the cracks of its front-facing sweet fable about a small town enjoying their movie night, is very much aware of all of this.
Who? Jason Adams When? 4:57 PM
Labels: 150 or Less, horror, reviews, TIFF, zhang yimou