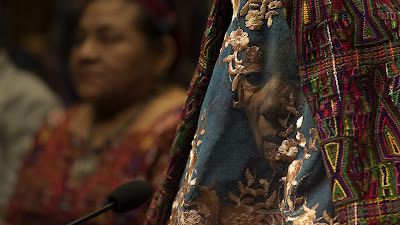 You could close your eyes and randomly point at a thousand horror films and I bet you that more than half of them would be considered "Quarantine Horror" -- and as a side-note I am really gunning for the term "QuarHor" (pronounced "Core Whore") to happen because its ugliness delights me, so let's work on that. How important has loneliness and isolation been to the genre since Day Uno? How many Nicole Kidmans have been trapped in their houses staring at their sad reflections as plague invaders rummage around their attics since time began?

It's why we've been able to snatch up several horror movies that were made before the coronavirus turned 2020 into its own horror movie and scream, "Oh this one speaks to our moment!" Look at the really marvelous Relic (which I reviewed a few weeks back) -- that played at Sundance before the world shut down, but a couple months later we're all vibing hard on its tale of three women stuck in a house closing in around them. Or Romola Garai's film Amulet from two weeks back (reviewed here), which... is about people trapped inside a house that's closing in around them. See also The Rental, and The Beach House, or heck even The Pool with the hot dude trapped inside the swimming pool with the crocodile. More like "COVID-ile" am I right? (Sorry.) 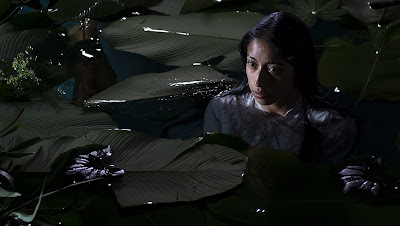 Well now we can add one more "made before the plague but fits right in with our moment" Horror Movie to the QuarHor heap -- over on Shudder today comes a new spin on the old folk-tale called La llorona, this one from the Guatemalan director Jayro Bustamante. If Bustamante's name is familiar to you perhaps its because his phenomenally disquieting coming out film Temblores got some play here in the US over the last year -- it played at NewFest last fall which was where I saw it and it's stuck with me ever since; enough that I realized halfway through La llorona was from the same director without having to look that fact up. Both films exist in the same stiflingly airless aristocratic world, where wealth smothers and snuffs out humanity, individuality and personality, done dead.

Temblores was a horror film in its own way but La llarona is such explicitly, tackling the legendary ghost story -- a ghost story which I went into pretty extensive detail about a few months ago over here after I went onto a little bender with its many filmic iterations towards the start of quarantine. The story of La llorona aka "The Crying Woman" has been turned into numerous films over the decades, but I think I have a new favorite with Bustamente's politically-charged version. His film sets the ancient score-settler loose on the cloistered family of an elderly former general, who's just gotten the little charge of "Genocide" overturned thanks to the corrupt court system and his connections. 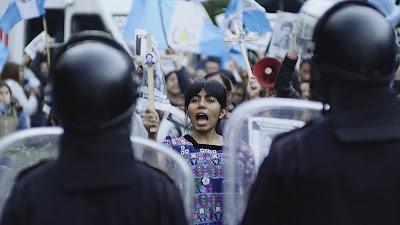 Enrique (Julio Diaz), with echoes of Harvey Weinstein's walker, play-acts frailty and helplessness for the angry crowds that have come to lynch him, but the second he's out of sight he lights up a cigarette, breathes calmly, lost in troubles that seem to be more about his legacy than any attack of conscience. His family -- alongside a security guard played by Temblores' leading man Juan Pablo Olyslager -- has gathered at his side to show support, but even they seem unsure of Enrique's true history and what he might have been capable of doing... although it seems to mostly be learned ignorance from them. They didn't want to see.

But now they're all trapped in a mansion with a protesting mob at their doorstep, unable to escape from the truths they've been avoiding. And in like a wisp slips a new maid called Valeriana (María Telón), with eyes so big and watchful that everything liquifies before them. Including the floors, the walls, and everyone's nerves.

The ghosts of Enrique's horrors seem to rise from up the floorboards -- the palatial backyard and pool becomes damp, overgrown, swarmed with bleating frogs. The jungles where this bad man committed his atrocities are no longer okay with keeping their place -- like the house from Parasite (which feels like it had to be an influence) the rains will come, and keep on coming, until even their dreams drip with them. You can throw up all the walls you want -- we carry our poisons, our ruinations, inside of us, beating fast and deep. Our wickedness will always worm its way in. Or out. 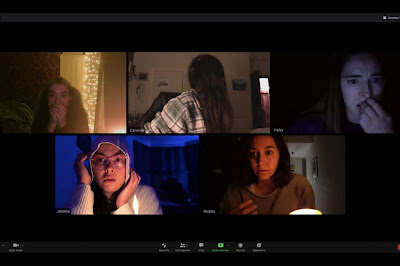 La llorona was made in 2019 before COVID struck, but I also recommend our very first post-COVID shocker -- seriously just bless the Horror Genre, which is always so satisfactorily there taking the world's temperature at every single moment -- called Host, which hit Shudder last week after being filmed mid-lockdown, and which has already proven itself a popular meme-maker. A found-footage spooker akin to Searching with John Cho or the Unfriended films -- meaning it's set entirely on computer screens -- Host exploits our current communal quarantine Zoom experiences to great creepy relentlessly-jumpy effect. I haven't leapt this far off my couch since I heard there were Clorox Wipes at the local Dollar Store.

A collection of six-ish friends more or less (don't ask me to differentiate them too far, this isn't that kind of movie save the broadest of strokes) gather on the social-networking app to chat and stuff -- seems like this time they're gonna do something special to goose their bored Pandemic Days, and invite on a Medium one's friendly with, for a seance type situation. And before you think this sounds far fetched let me tell you that the subject of Tarot Card readings came up on my weekly Friend Zooms on more than one occasion, and this all felt on point.

Naturally this all goes horribly wrong and the friends let something -- something like The Devil!!!! -- into their chatroom, and all Hell -- yes Hell!!! -- breaks loose. Host might be far less serious and political about its intentions than La llorona was but it's also sinisterly unsettling, expertly playing with where we are looking when, and with making the most out of the platform's glitches and quirks -- you'll never look at a Zoom Background or Facial Recognition Software the same way again!

And it's just in general busy with being a hell of a fun, scary ride. I'd say it's the sort of movie you'd want to watch with a bunch of friends but that would clearly miss the point! Perhaps you can watch it with friends on Zoom? Now that'd be something to tweet home about. 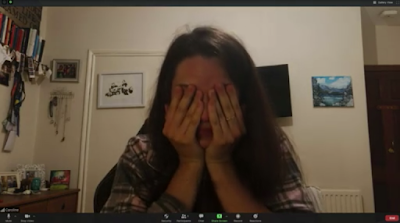