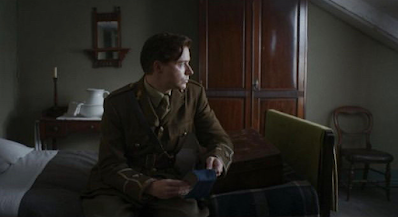 "Personally, I don’t go to the cinema anymore. When you make films, you become aware of the music, the acting, where the camera is, and in British films, there’s a lot of the same people in all of them, so you just see a collection of mannerisms. It’s so bad, you think, “I can’t watch this.” Jane Austen films, I refuse to watch. They are paralyzingly boring. The Brontes are much better. There’s a bit more sex to them. Once you start making something, it’s impossible not to see the structure. You just sit there calling out the shots — close up, close up, back to wide, and now another close-up or over-the-shoulder shot."

Today Variety has a chat with the director Terence Davies up, here on the precipice of his film Benediction, about the gay poet Siegfried Sassoon and starring Jack Lowden in the role, premiering at TIFF -- I have said one or two or twenty things about that movie, and I am incredibly excited to see it in a few days! The first clip from the film also premiered on Deadline over the weekend, you can watch it right here. If I could embed the video here I would, apologies for making you click a link, all that jazz. Here's a gif from behind-the-scenes though (and no I have no idea where this footage is):

NOW I am very curious about a Davies film based upon a Bronte’s novel, perhaps Agnes Grey or The Tenant of Windfell Hall…Anne’s work still wait a serious appointment with Cinema

That clip is sadly not very promising. It looks stilted, mannered and dry. The war hospital where Sassoon and Owen met is a mile from where I live so I'll go and see it anyway.

The BTS scene seems to be in a steam loco cab, and he's trying to open the whistle valve without becoming deaf!...