Some Jake In Your Ears 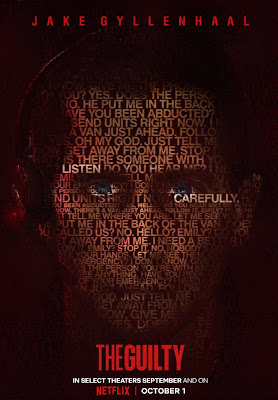 I imagine some of you steer clear of Twitter because I have been told it is a "nightmare hellscape" to some, so perhaps you missed me tweeting this stuff out over the weekend (I personally thrive inside of most nightmare hellscapes) -- a teaser poster and a teaser trailer for Antoine Fuqua's forthcoming Netflix remake The Guilty, starring Jake Gyllenhaal, dropped. Well actually what happened was first Jake posted a phone number on his Instagram account...

Jake Gyllenhaal just posted a phone number that gives you an ad for THE GUILTY if you call it! #theguilty pic.twitter.com/DZM68Gai5u

... and when you called the number suddenly it was Jake's voice talking to you and, well, it was such an erotic experience I didn't hear a word of what else happened. I might have actually been unconscious for most of Saturday because of it? Anyway by the time I'd woken up there was also this teaser trailer, which uses the same audio as the recorded phone call, but adds the specter of Jake's face to the mix. This gives me more hope that the film might, like the original (which PS is streaming on Hulu right now), stay one hundered percent trained on Jake, but we'll see. The film is out on October 1st on Netflix; see some photos from the film here.
Who? Jason Adams When? 11:59 AM
Labels: jake gyllenhaal, Peter Sarsgaard, Riley Keough, trailers

I saw this at New Directors at MOMA. Having grown up at the end of the age of radio, I couldn't help thinking what a great play this would have been for radio. That said, I loved the film and I think Jake is absolutely perfect acting wise for making it work. Doubts remain about everything else. I'll have to see.