Heads up on a new obsession o' mine -- if you've got Criterion Channel you need to check out Ulrike Ottinger's 1979 film Ticket of No Return, which they've got streaming this month as part of the director Richard Linklater's picks. And yes if you know about my ambivalence towards the films of Linklater then you might understand it when I say him putting this movie in front of me is the greatest thing he's ever done. Thanks, Richard! Starring frequent Ottinger collaborator Tabea Blumenschein in a nearly wordless performance the film follows a woman who goes to Berlin to do nothing but drink herself to death -- imagine Leaving Las Vegas directed by Douglas Sirk, or as I called it on Twitter, "Tati Meets Fassbinder shot by Guy Bourdin." 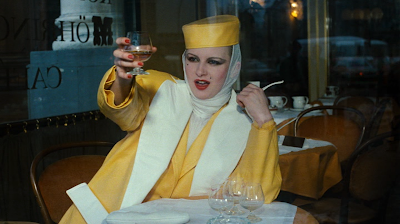 It is so my shit! So it will probably be your shit. This was my very first Ottinger film -- the Metrograph theater here in NYC had planned a big retrospective of her films in March 2020 where she was going to be here and everything and then, well, March 2020 happened. They did end up streaming them virtually that fall but I missed it because I have no idea, I was probably curled up in the corner of my apartment crying -- it was 2020. Anyway I'm now furious I missed out on this, especially because her movies are basically impossible to see. They aren't available on home video unless you order them from Ottinger's website (thx Ross) but I warn you they're outrageously expensive. 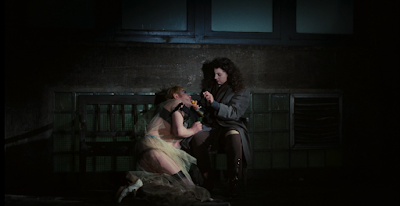 Which is a damned shame, given how immediately and entirely infatuated I found myself with Ticket of No Return. Oh and my Fassbinder mention above isn't just because both filmmakers are German -- there are a slew of overlapping collaborators, including Peer Raben doing the music and actors like Volker Spengler, Eddie Constantine, and Kurt Raab popping up. There's also just a vibe -- a big vibe -- that they share. Queer and depressive and fabulous all at once. I'm in love. Release a boxed-set, Criterion! I gotta get my hands on Freak Orlando ASAP. Any Ottinger fans out there? 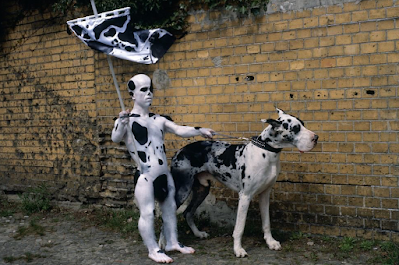