I Dream of John-John 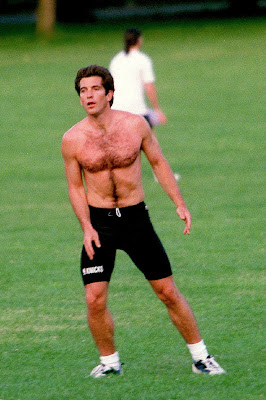 Didja all see the news that Ryan Murphy is planning on making a limited-series called American Love Story that will tell the story of John F. Kennedy Jr's tragic romance with Carolyn Bessette? Yes I might be using this news as an excuse to post more pictures of John-John gracing Central Park with his hirsute presence back in the 90s, and what of it? Anyway this project is obviously impossible since there is no man on Earth who could play that man convincingly. Y'all come at me in the comments with suggestions (especially if you link to pictures of men who vaguely look like this!) but I'll accept nobody. He was one of a kind perfect. 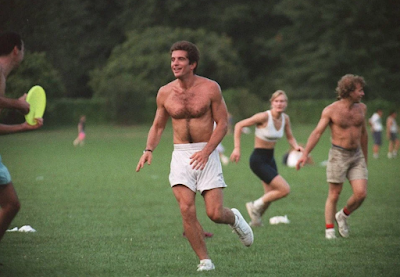 You are all going down, along with your beloved pedophile hollywood posers. Time will soon put everybody on its rightful place… roll over, slave dogs, there is no stopping the end of all this fake…

Come on Jason, this one's just too easy, isn't it? The correct answer to your question is obviously David Corenswet, right?

And who will play Michael Bergin, the underwear model that Carolyn Bessette continued to bonk after she married John-John.

Both Aiden Turner and Hugh Jackman are too old for the role. Ezra Miller would be fascinating in the role.

i agree with mack!

i can't insert a photo but that very pretty man who just tried to sit in the chaise next to jennifer coolidge?
he sure is pretty...

Chris Wood is the first to come to mind. Not super similar in appearance (who is), but has the same cocky sweetness and a hairy chest (like Jr.) for the many (hopefully) shirtless scenes. I like Elordi as well, but the hairless chest would be too distracting.

Well, he’s not an actor, but model Justice Joslin is like the love child of John-John and Paul Newman...so even better. Yeah, I said it! Google him. I promise you won’t regret it.

Well, as to "there is no man on Earth who could play that man convincingly", I would agree if one were to restrict the choice ONLY to actors of (purely?) Caucasian ancestry, but if we were to look further afield there are excellent possibilities.

Since you've mentioned to link to pictures of the men suggested, here goes. I would think the mixed-ethnicity (part Bene Israeli Jewish, Part Indian Punjabi) actor, model and VJ- Aditya Roy Kapur, would be an excellent choice, because of the following marked similarities:

2) A superbly lithe and toned physique, without being over "himbo" bulky - check.

4) Sharp features, including a jawline and cheekbones that could literally give paper cuts- check

5) Privileged, preppy backgrounds - (albeit in ARK's case it is a relatively more "modest" privilege, family background in arts and cinema rather than the exalted halls of power) - check

7) Had a somewhat unruly mass of curls when younger, trimmed (thankfully!) to accentuate his superb looks later on - check.

8) A similar reputation for NOT being one of the brightest sparks around - check.

He only needs to grow out his torso fuzz more to play the role. :-) ARK does have furry pecs naturally, albeit shaved for most of his films till date.

If only Mark Harmon had been born in the 1990s instead of 1951, he would be the PERFECT choice to play JFK Jr. The clean cut good looks, the athletic physicality, the raw and earthy masculinity with that nice hairy torso.....

Beau Mirchoff isn't a bad alternative per se, but he's too burly and while he looks good, he looks nothing like John.

In response to suggestions above of Chris Wood - puzzled that he's described as having a hairy chest like Jr? I think it says something of the artificial and excessively manscaped standard applied in the modeling and movie world, that any actor having even the faintest sprinkling of chest fuzz gets described as having a "hairy chest". :-) Chris is a good lookin' dude no doubt, but he does not have a compelling charisma or star wattage. Simply doesn't look virile enough!