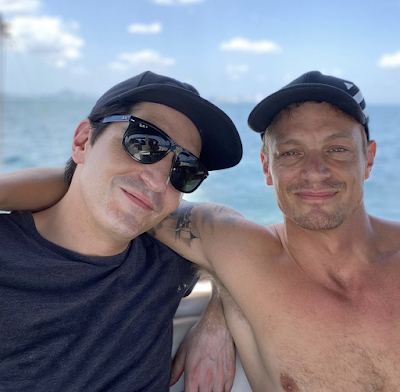 James Gunn's Suicide Squad sequel, imaginatively titled The Suicide Squad, premiered in Los Angeles last evening -- look here is a photo of Jai Courtney looking real hot in white with a stache at that event at this link! -- and so here for our morning are these two photos of co-stars Joel Kinnaman & David Dastmalchian (via the latter's Insta) being friendly with one another in a water-based location. Aww, adorable. Dastmalchian is one of those character actors who shows up literally everywhere -- he was in Nolan's Batman movies, he's in this new DC movie, he's in the MCU's Ant-Man films -- he's in Dune for god's sake. He was on the new season of Twin Peaks!  I think he just has to cross Star Wars off still and then he'll have Nerd Bingo. Who does he think he is, Mads Mikkelsen??? Anyway Suicide Squad -- excuse me, The Suicide Squad -- is out everywhere inside of theaters on this Friday -- are you going to go see it? I actually do want to see it (I like Gunn) but I'm nowhere near ready to go see a blockbuster in a crowded opening weekend theater yet, especially with things surging everywhere again! Small movies with barely any crowds? Sure. A packed theater with nobody wearing masks? Not gonna happen any time soon! So we'll be waiting for on demand. 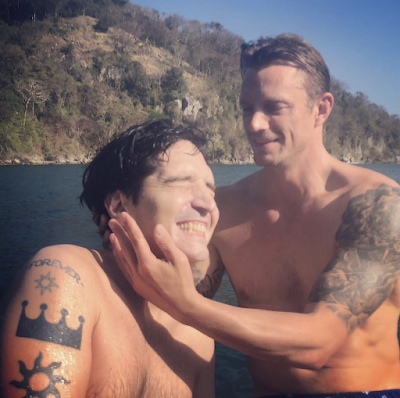 You don't have HBOMax? That's where I'll be watching.

Oh shit, is it dropping on HBO? I'm a moron, I didn't even realize, I thought this was a theaters-only release. I can't keep up with what's where anymore, I should have double checked. I AM SO RELIEVED. Thanks!

Yes indeed, you ARE a moron

Anonymous Anonymous said...
Yes indeed, you ARE a moron

Dude, are you so hard up that you're trolling a movie blog? Do better.

Mind your own business, smartass