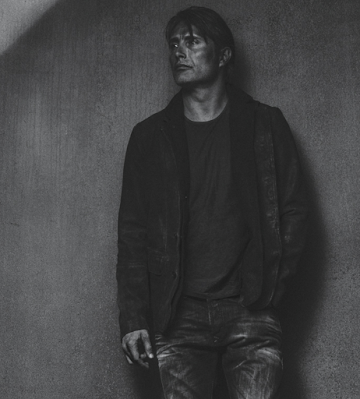 You have probably already read this by now but in case you get all of your news from this here website... oh my god, don't. Don't do that. I can only imagine. Picture it, it's like The Truman Show, only with a child raised from birth to death with MNPP as their source of information. That'd be a horny, dumb baby, my god. Anyway! Mads! He just got cast in the fifth Indiana Jones movie. No word of course on his role, but everybody's naturally assuming he'll be the villain because, you know, his face and his entire career or whatever. But I think we could possibly be jumping to conclusions. Maybe they will surprise us. But if he is the villain I don't see any reason to be annoyed about it -- being a villain has bought Mads a lot of expensive haircuts over the years. (His hair always looks so expensive, doesn't it?) Really I'm just hoping he uses his star-power to force a fourth season of Hannibal into production. Do whatever ya gotta do, Mr. Mikkelsen!

The dance in Another Round is one of the all time great scenes in cinema. KING. LOVER. DADDY.