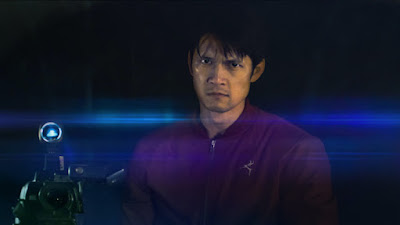 If there's one movie sub-genre overripe for a comeback I'd wager the "Conspiracy Thriller" of the 1970s, a la The Parallax View and All the President's Men, is fit to burst -- I for one cannot understand how we haven't been riding on waves of them post-2016, which turned us all on every side of the political divides into a flock of Woodward & Bernsteins, wild-eyed connecting red strings between a blinking receiver at the top of 725 5th Avenue with Russian Kompromat. I suppose the only answer is, "Hollywood doesn't make those kinds of thoughtful movies anymore," so instead we're forced to read between the lines of Avengers dialogue for whiffs of our deepest cultural fears writ out, when once upon a time Adult Movies dove face-first into such subversive spectacle, and entertainingly to boot.

Thankfully we don't have to rely on just the blockbusters of mainstream Hollywood for our movies though, and so we get here and there little psycho-conspiratorial gems like Broadcast Signal Intrusion, Jacob Gentry's unsettling and cryptic new indie thriller (now showing as part of the Fantasia Film Festival), have popped up, poked us in the side, and shrieked our moment's angst into some artistic form. It stars Harry Shum Jr. as James, a video archivist mourning his missing wife who stumbles upon one of the intrusions of the title, where lo-fi scammers sneaked their way onto the airwaves and in the middle of your regularly scheduled programming inserted a few seconds of terrifying footage seemingly streamed straight out from our collective nightmares.

These intrusions are the film's greatest asset -- when I tell you that Gentry seems to have plunged his hands into the meat of Hell's belly and tossed the entrails of what he found across the screen I am possibly understating how much these snippets of blank-faced mask ladies flapping their empty mouths to a discordant soundtrack unnerved me. It's David Lynch by way of the Ringu tape -- the old familiar skittish skips of VHS tech feeling like tears in reality, looking through to a place we're not meant to look. If you're old enough to have tried to catch bits of nudity on the scrambled Pay-Per-View channel I want you to imagine catching a snuff film instead (and on that note I did think of the 1995 forgotten classic Mute Witness here) -- that feeling, dirty and wrong, pulses in from the edges of this movie in most excellently doled amounts. 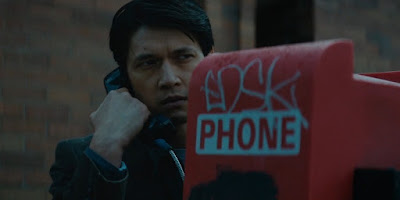 As James starts looking for a second, and then a never-seen third signal, our vertigo senses tingle. (And if you've never seen the true-life 1987 incident that this film's based on, involving an unsettling twist on 80s icon Max Headroom, I recommend you check it out on YouTube. And then take a shower.) James' quest, spurred on by his desperate need to find answers where there probably are none, drags him and us with deeper into the skittering and unpleasant abyss, every connection either confirmation bias or a subtle fraying at the sides of reality's fabric caught on film, transferred through seven generations, and sprayed out the opposite end, chicken bones and fortune tales.

Does the film bite off more mysteries than it can chew? Possibly -- like an army of Gyllenhaals in Zodiac we find ourselves lost in many a basement sniffing musty boxes and file-cases, no end in sight, strange footfalls overhead, and no visible legs in sight. It's more of a hover above a crime-scene, like we're the ghost of a person who just got surprised bonked in the head, trying to figure out who killed us before we slip into the light; it's false-starts and back-steps and occasionally frustrating in the way the unknowable will always be. I dug that about it. Leave the pat answers for the Avengers -- modern living seems to me more of a spiral with no end in sight, and Broadcast Signal Intrusion tunes into that frequency more than it doesn't.

This movie was spooky as hell! Thank you for the recommendation, I’ll never get that lady-mask face out of my nightmares.