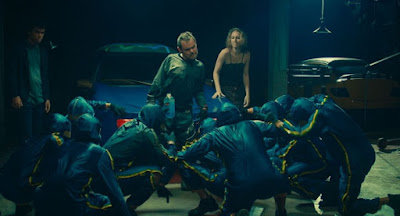 There is a clear and definite thread of surrealist dystopia winding its way through international cinema these days. Whether it's the Buick-sized spacecrafts flying over the small village of Bacurau, the paint splatter riots bearing down on the thought-safe sanctuaries of the well-monied in New Order, or the dance dance revolutions of Pablo Lorrain's Ema (which coincidentally is opening this weekend), filmmakers are finding ways of rendering our precipitous moment stranger still -- only breaking the logic of reality will seem to do, to approach the sinister sensation clotting the air. Things don't make no damn sense, and these movies know it.

Add to the flaming near-future heap King Car, Renata Pinheiro's bizarre Brazilian robopocalypse of the soul, which feels a bit like all of those movies and then also none of them in its unrelenting uniqueness. Seen being born in the backseat of a taxi-cab where he's immediately swaddled in plastic sheathing, Uno (Luciano Pedro Jr) discovers from a young age that he can speak to cars -- not "at" but "with,"  as they communicate back and protect him at all costs, their little dashboard Messiah. Taking the first of many victims as soon as he listens in, this deal's not nearly as sweet as its surface implies -- sure it's all shiny, but with purring fangs underneath.

Then once Uno's mad-doctor (make that mad-mechanic) uncle Ze (Matheus Nachtergale) learns of his nephew's odd gifts, he starts his tinkering, and suddenly the car's infernal whispers get tuned upward, outward -- somebody tosses them over a sexy beat and then forget about it. There's no fighting the rhythm; especially once we're primed to dance to our mutually-agreed-upon destruction. As with The Stuff and the Mogwai before it everybody wants a piece -- slide your ass into a super cool jumpsuit and reverberate with gibberish, blessed gibberish, the bass so deep it makes your bits glow. There's nothing so tempting as future tech, sleek and immediately disposable -- an arms-race right off a cliff made from mountains of former tossed-off iterations.

At a certain point we become so disassociated from our beginnings -- trying to find the through-line between a wooden wheel and an electronic synthesizer, we discover that we've invented the earth right out from under our feet. The self-replicating prophecy of technology moving on without us -- may it be the big killer-robots of James Cameron's imagination or simply the ghosts of the Tamagotchis, cresting the hills inside a hyper-real someplace cyberspace, somewhere we seem to know, feel it in our human bellies made of wet stuff, that we're being, we've been, all but left behind. King Car feels it too, and I recommend putting your hand on the hood and listening in; well it'll be speaking either way.

The movies you cited are all latin american. That is because we have the tradition of the fantastical realism. It's not something new, its our tradition.