Fantasia 2021: Beyond the Infinite Two Minutes 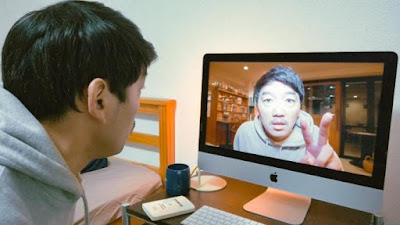 Reminiscent of the recent lo-fi zombie-winner One Cut of the Dead in its simplicity and crowd-pleasing ingenuity, Junta Yamaguchi's sci-fi comedy Beyond the Infinite Two Minutes (screening online as part of the 2021 Fantasia Film Festival right this very second) is a brain-tease of a time-looper that starts with the simplest of ideas -- what if the two-minute time-delay on a security camera actually allowed you a window into the future? -- and spins itself off into a maze of ever-maddening madcap thrills. The experience of watching it feels a lot like the experience of entertaining yourself with "what if" questions about silly space-time quandaries -- like squaring existence itself the ever tumbling complexities become the fun in and of themselves. It's a heck of a good ride.

The first film from the Japan-based theater group called Europe Kikaku, Two Minutes stars all newcomers from that troupe, and it's got that jolt of in-person stage-craft about it -- the "Let's put on a show!" vibes are strong with this one. What begins with a small story of a sometime musician and full-time cafe owner Kato (Kazunari Tosa) who suddenly finds his future self talking to him from his TV screen keeps expanding itself from its center -- more characters get pulled in, the time-loops start piling up, and by the time two screens are being turned towards each other creating a feedback loop between the past and the present it's best just to sit back and enjoy the goofiness as it gets tossed your way.

Filled with charming small sketches of colorful folks and low-stakes inter-personal dramas -- will Katu get a date with the girl who works next door? Will somebody win a zebra-striped pill-bug toy from a vending machine? (And lemme tell you what, I want one of those pillbug toys!) -- that slowly ratchet up the drama as time itself spins off its axis, Beyond the Infinite Two Minutes is in actuality exactly seventy minutes of self-contained super-fun. Filmed a la Hitchcock's Rope, with the entertaining fakery of a single shot plain in its "oh here the camera goes into somebody's backside" gimmick, this flick's pure fun, an hour and ten straight of sit back and just enjoy. 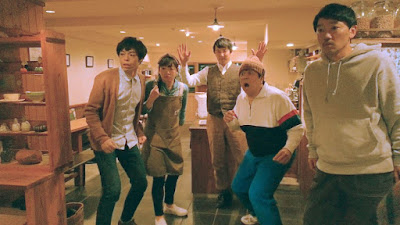