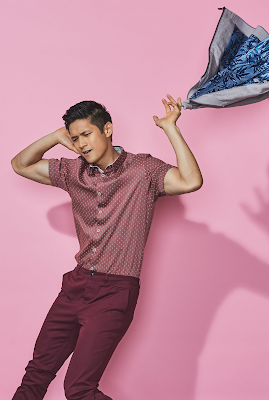 Alright it's a Thursday early-evening in the months of the season called summer and so you should know what that means -- means I'm outta here for a three-day weekend. Except not, not totally, because the Fantasia Film Festival is I am sure you're aware now a happening, a right now happening, and I'll probably be popping in at some point with a review or two. If you missed my preview of the fest earlier this week click here, where I listed a full twenty you read that right twenty movies that I recommend. Fantasia's a feast, I tells ya, a feast. And to get to that photo of Harry Shum Jr. seen up top -- one of the movies I recommended, one I will be reviewing very soon, is called Broadcast Signal Intrusion and it stars, whaddyaknow, Mr. Shum Jr. himself. That photo isn't from the film -- indeed that pink mood is very far from the dark strange mood of that movie. But it's a nice photo I think we can all agree. And on that note -- nice pictures of nice-looking men in Fantasia movies, I mean -- I also recommend you bookmark the below Twitter thread of mine because I will also be updating that with treats as we roll along as well. Happy weekend, everybody!

A thread of cute guys in @FantasiaFest movies suddenly seems like a good idea! In that spirit — hey there, Kenshi Okada pic.twitter.com/RysxKMtg1y