How Green Was My Valet 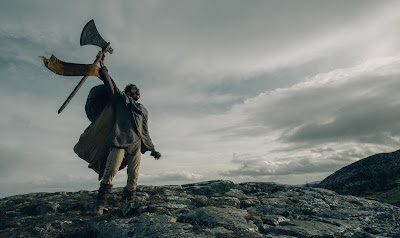 At the heart of David Lowery's 2017 film A Ghost Story a hipster interloper (played by musician and sometime-actor Will Oldham) attending a party in the home of our sheet-headed protagonist delivers a long speech about personal and cultural legacy -- about how it doesn't matter what one accomplishes in life, because all of our monuments will eventually crumble due to the inexorable march of time, cruel time. We all have those little cartoon brooms from The Sorcerer's Apprentice scurrying behind us, sweeping away every mark we've left; even Beethoven's 9th will one day dissipate in the ether, never to be heard again.

That's a concern that's come up time and again in Lowery's work, whether it's by disappearing dragon or the movie star Robert Redford, and so it makes a world of sense that the filmmaker would be drawn to the mysterious 14th century tale called Sir Gawain and the Green Knight, which has been confounding and delighting scholars and storytellers for seven full centuries and yet somehow, in all its glorious anonymity, still stands today, as weird and wonderful and malleable to shifting modernity as ever.

Lowery's staggering and mysterious film (finally out tomorrow) drops the front half of the full title, punning itself hard on just being The Green Knight -- the devilishly handsome and charismatic Dev Patel fills in the Gawain part but Lowery's more concerned with how green this Knight, and the other Knight in its other way, be. When we meet him Gawain is green in the way of youth. A shoot not yet nicked by time, he's playful and dashed with innocence, eager to prove himself -- as goes the way of men whose skin is yet untroubled by scars or much sadness. 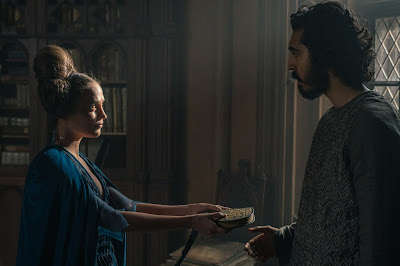 But beware what you ask for, the saying's gone for a thousand thousand years, and with good reason. Invited to a Christmas party by his uncle, the good King called Arthur (a divinely desiccated Sean Harris, playing the legend halfway to skeleton-town), Gawain laments his adventure-less life, and before the syllables can even cool in the air the doors to the Castle have been blasted open and a gauntlet's been thrown down literally at his feet -- the life and death kind, full of superstitious riddles and bounteous hazards galore; tis a good yarn that's lasted all of these years!

And in Lowery's hands it's magic. Magick? Magicks. People far smarter than I have been teasing out the mysteries of Anonymous' epic poem, which is on its surface actually straightforwardly told, with long passages describing feasts and the passages of seasons in exquisite detail, but which only gets richer and stranger the further you telescope out. The Green Knight who comes a'knockin' at King Arthur's Court, his skin and horse all an otherworldly emeraldian tone, could mean anything, and has come to mean all of the anythings across the centuries. And Lowery, a filmmaker who loves slowing time down to a crawl and existing inside of such strangeness, who always has time for enigma, relishes the riddles, the neither here nor there and also here and also there too, at once, of it.

He's basically the perfect filmmaker for this material, leading us into a labyrinth of essential questions about the nature of time, of purpose, of existence, in an unhurried but visually dynamic (and then some) way. Gawain's adventures are episodic but Lowery makes each feel prismatic off a single piece, as if Gawain is standing still at the center of a maze while all the doorways and possibilites spin and present themselves. Here is where we are robbed and left for dead; here is where a headless specter in a gothic constant night asks our assistance; here is where our future bends back to our past. The finer plot details -- so where's that axe come from once it's already been disappeared? -- cease to matter in the storm of telling and retelling; on-screen titles remind us we're living inside a story that's been told so many times its particulars turn to sand. 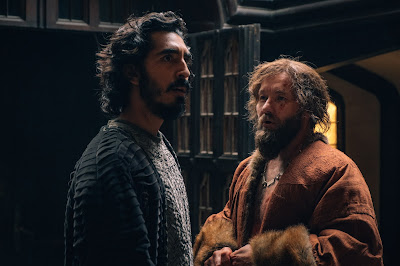 And so actors play different characters, as with Alicia Vikander who plays two very important ladies in Gawain's life -- but are they different? And is that her voice coming out of the talking fox that's been following our young hero about? And do the giants Gawain comes across at one point, enigmatic weirdos a hundred stories tall who howl and evaporate like fog across stone plateaus stretched to the forever horizon, do they maybe even resemble her a bit as well? Romantic notions of the old-fashioned chivalric type, twisted by history's endless variations, become queer inscrutable monumental things -- actually queer at one point too, as Joel Edgerton appears for an entertaining portion to tease out the poem's legendary gay kissy-kissy moments with a wash of bloody and beady-eyed glee.

Lowery even rewrites the Ghost Story speech I mentioned at review's start and let's one of Vikander's characters rip into those same ideas and notions, on how green is life and life is moss and moss will find its way into every nook and cranny and render us bones in a snap, a snap so fast our bones spin. The camera spins once and Gawain is bones, then back again -- an entire act side-swiped from Scorsese's Last Temptation of Christ gives us the false floors of alternate timelines and happy endings, happy endings that go on for too long to stay that way for long.

The Green Knight is after all a Christmas movie, and the hangover of presents unwrapped hangs heavy -- now what? We put away the things we got, the books back on the shelves, and we keep on living, and another Christmas comes, and we keep on living, books up and bones over, and on. Along the way we make choices and they take us one way, another way, a thousand paths and a half-thousand years all leading to the same place. Do our adventures matter? We chant our stories like snaps of light, firework sparks in dark caverns briefly illuminating the walls, beautiful and warm but for so short too short a moment. Accept the kisses and the beard strokes while they're offered, because aggressive green is coming, at the door, inside the door, the door itself, the walls of the chapel and the spill of the light, bruises belted across our deepest beings. Unknowable giants lumbering unto nowhere, and gone, not a mark in their wake. 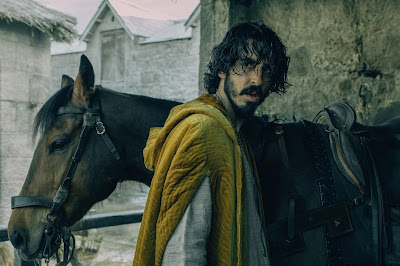 Can. Not. Wait. (May even risk some Delta to go to an actual theater for the first time! Seems thematically appropriate.)

yep, risk getting infected with the variant of a virus that so far no-bo-dy have been able to isolate… effing morons, it is called basic biology!

Got to see it today in Germany. Blew me away. Simply mesmerizing and gorgeous to look out, not to mention Patel ...