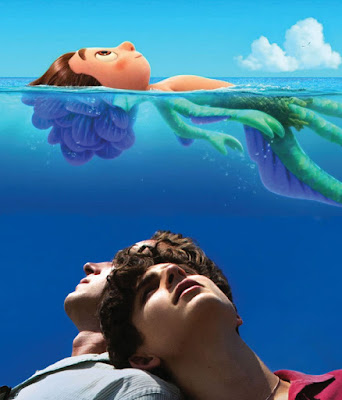 Well this was certainly inevitable. Fulfilling my destiny as That Guy at last today I pounded out a great big thing for Pajiba that talks about Pixar's queer-coded new animation Luca, its oft-discussed similarities to Luca Guadagnino's 2017 film Call Me By Your Name (maybe you've heard me talk about that movie once or twice), and the whole miasmatic convo about "male friendships" that's been making the rounds online for the past week or so ever since Anthony Mackie barfed out whatever the hell he was talking about regarding the gay fan-shipping of his Marvel character. It's a lot -- for one it's around three-thousand words, and I haven't written something literally that lot in awhile. But for another it's just a lot of ideas all crammed on top of one another and I probably could've written even more. I can't be stopped! But for now it is what it is, it's in the world, and I must run and hide from it since I poured some heart into it. Please do go read it though! I appreciate it!
Who? Jason Adams When? 4:57 PM
Labels: Armie Hammer, Call Me By Your Name, Luca Guadagnino, Pixar, Sebastian Stan, Timothée Chalamet

Link to the article doesn't work :(

Sorry about that! The link at the start of the article was okay but that second one was indeed wonky, not sure what happened -- it's fixed now :)