Alright alright, I will bite, Luke. (Also -- I will bite Luke.) I'll post your video begging to be posted this morning, but only because there is other Luke Evans News at hand. The second season of The Alienist, subtitled Angel of Darkness, is hitting blu-ray in a couple of weeks! Coincidentally I got a review copy last night and can't wait to put on my tightest man-vest and shine my shoes and get myself a pince-nez and get to diggin' through the special features. I did watch the show as it aired and posted such sporadically -- I actually love The Alienist, way more than I expected to (and I think Luke is very good on it as well!), and am always happy to hear from other fans if you're out there. Please comment! But first I'll share the press release and special features stuff for the blu-ray after the jump... 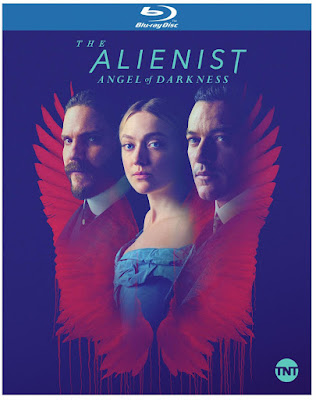 “Sometimes all you want is a really compelling murder mystery with high production value and compelling characters, and in that way The Alienist: Angel of Darkness delivers.” – Collider
“This is a complex crime story with enough twists and turns to keep even the most experienced genre addict on their toes.”– Film International
THE ALIENIST: ANGEL OF DARKNESS
A LIMITED SERIES
Stalking Your Streets on May 18, 2021
When the Blu-ray™ & DVD Become Available!
BURBANK, CA (February 2, 2021) Follow the trail – find the killer! Get ready to test your investigation skills with TNT’s award-winning psychological thriller as Warner Bros Home Entertainment brings more plot twists and shocking turns with the release of The Alienist: Angel of Darkness on Blu-ray and DVD on May 18, 2021. Uncover the secrets and go on an edge-of-your-seat journey with all 8 episodes from the second season, plus enjoy the captivating extra features including a season 1 recap, behind-the-scenes featurettes, a set tour, and series overview! The Alienist: Angel of Darkness is priced to own at $24.98 SRP for the DVD and $29.98 SRP for the Blu-ray, which includes a Digital Copy (US Only). The Alienist: Angel of Darkness is also available to own on Digital via purchase from digital retailers.
It is June 1897. A year has passed since Dr. Laszlo Kreizler, a pioneer in forensic psychiatry, tracked down the brutal serial killer John Beecham with the help of a team of trusted companions and a revolutionary application of the principles of his discipline. Kreizler and his friends--high-living crime reporter John Schuyler Moore; indomitable, derringer-toting Sara Howard; the brilliant (and bickering) detective brothers Marcus and Lucius Isaacson; powerful and compassionate Cyrus Montrose; and Stevie Taggert, the boy Kreizler saved from a life of street crime--have returned to their former pursuits and tried to forget the horror of the Beecham case. But when the distraught wife of a Spanish diplomat begs Sara's aid, the team reunites to help find her kidnapped infant daughter. It is a case fraught with danger since Spain and the United States are on the verge of war.
The Alienist: Angel of Darkness stars Daniel Brühl (Rush), Luke Evans (Midway), Dakota Fanning (Once Upon a Time... in Hollywood), Douglas Smith (“Big Little Lies”), Matthew Shear (Mistress America), Robert Ray Wisdom (“The Wire”), Ted Levine (Jurassic World: Fallen Kingdom), Melanie Field (Heathers) and Rosy McEwen. The series is produced by Paramount Television Studios, with Anonymous Content's Rosalie Swedlin, showrunner Stuart Carolan, director David Caffrey, writer Alyson Feltes, Pavlina Hatoupis, Ben Rosenblatt, Eric Roth, and Cary Joji Fukunaga serving as executive producers.
SPECIAL FEATURES
8 ONE-HOUR EPISODES
DIGITAL
The Alienist: Angel of Darkness is also available to own on Digital. Digital allows consumers to instantly stream and download all episodes to watch anywhere and anytime on their favorite devices. Digital is available from various retailers including Apple TV, Amazon Video, Google Play, Vudu, PlayStation, Xbox and others. A Digital Copy is also included in the U.S. with the purchase of specially marked Blu-ray discs for redemption and cloud storage.
BASICS
DVD/BD Release Date: May 18, 2021
Total Runtime: Approx. 391 minutes
Enhanced Content Runtime: 14 minutes
3 DVD-9 / 2 BD-50
Audio – English (5.1)
Subtitles – English SDH
Rated: TV-MA
DVD Price: $24.98 SRP
Blu-ray Price: $29.98 SRP
Who? Jason Adams When? 9:49 AM
Labels: Daniel Brühl, gratuitous, horror, Luke Evans

I liked The Alienist very much. The acting and story were good. And I am always a sucker for good production design. But what I liked most is how they portrayed the camaraderie of the leads. Mature friendships among adults are seldom seen in movies or TV. So you believed these three characters were friends, despite all the bumps and bruises.