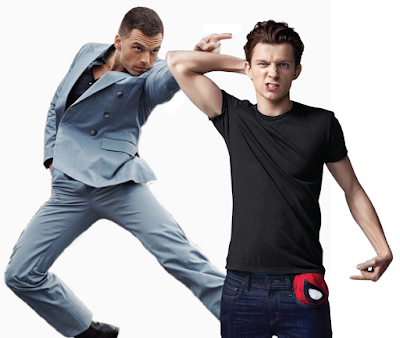 "There's only one bottom."
-- That would be Sebastian Stan talking to EW about MCU co-star Tom Holland's spot among the Marvel stars -- jokingly, mind you, because Holland once made a crack about Seb's Falcon and the Winter Soldier co-star Anthony Mackie's lack of a standalone film. But I refuse to believe that Stan didn't know what he was really saying here, and bless him for it. I'll feed off this quote for years.

The teasing rivalries among the Marvel Men are always good for a pop of sexual tension -- never forget this moment, after all:

Okay maybe there wasn't any teasing rivalry going on, I just wanted to post that gif for the 10,000th time in my life -- sue me. In related news did y'all hear the (foundation-less) rumors that Aaron Taylor-Johnson might be about to get a divorce? First things first there's no evidence that this is true -- it seems to have borne by the fact that the two are selling a house they own. But his wife Sam is mega-rich, and they no doubt owns several homes. Anyway I'll admit his marriage to a woman 25 years older than him who he met as his director when he was around 17-years-old was always a bit discomfiting, but they'd been together for so long and had all those kids together; it's not up to me to judge anybody's relationships. Unless Aaron is looking for someone to have a torrid affair with, in which case I will be gladly judge jury and sex-ecutioner.

"Discomfiting"? This sicko predator started fucking a child on a movie set when she was a desperate 42 year old woman with 2 children (a 10 year old and newborn). She was his "superior" and described him as "very shy and insecure" on set.

She divorced her husband after she "fell in love" with a child. She then "accidentally" got pregnant with this boy's baby when he was 19 years old and she was 44.

In interviews she said she got pregnant because "he wanted kids", he was 19 at the time. She has bragged in numerous interviews that he can't be away from her for more than a few hours and that they've “only been apart for maybe two or three days” at a time.

As anyone who's been in this type of abusive relationship knows, this kind of isolation is the number one strategy employed by manipulators and groomers. If a person is prevented from having space they are unable to recognize the abusive nature of their groomer's behavior.

I also find it "discomfiting" that it's any of our business to be that upset, MSB. We don't know these people -- I'm not going to work myself up into a froth over their personal lives. Aaron, by all accounts, seems fine. Like I said it is not my place to judge someone else's happiness. I've said it a million times - gossip ain't my bag. I really don't give a shit in actuality what these celebrities do in their home lives. I just like to stare at pictures of pretty people. I got plenty of my own shit to deal with!

MSB can go fuck himself

Gonna change the subject here-
I remember seeing The Impossible and thinking, 'Who is this amazing child?!'. I'm very cynical w/ child actors, and I do believe in a lot of instances, it's a good director.
But Holland is not only a formidable actor (future Oscar winner, for sure), but he is loaded with charm and that thing you're only born with-charisma. He's a star.

If I in any way guided you to that glorious quote, my work here is done.