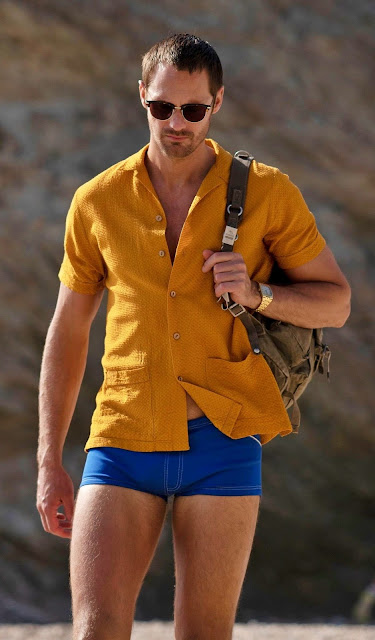 I think you'll all forgive me for using that photo of Alexander Skarsgard in Park Chan-wook's miniseries The Little Drummer Girl a few years back -- and excuse me for a moment while I go check Amazon to see if that series ever got put out onto blu-ray... oh it got a UK release, on DVD at least, I might have to buy that since that series rocks -- even though that is only tangentially related to the news I am sharing. I mean I suppose I could've posted a photo of Margaret Atwood or one of her book covers but I know what grabs your eyeballs!

So the news is that one of the producers of The Little Drummer Girl (by the name of Mike Lesslie) has just attached himself to the long-gestating adaptation of Atwood's MaddAddam trilogy of books! We've been posting about the possibility of this series as long as we've been posting about anything on this website; we fell in love with the first book Oryx & Crake the minute it was released in 2003 and wanted a movie of that, but then several years later came the second and third books, and talk of a series for Hulu, and Darren Aronofsky was even attached for a second. It's been a journey. I mean it looks like we'll be getting a Y: The Last Man series before this, which is the other long long long delayed property I've been following.

In case you don't know what the trilogy's about here, I will steal Deadline's plot description:

"At the center of the trilogy are the events leading up to the near destruction of mankind and civilization by a malicious bioengineered pandemic. The catalyst for it all is Crake, a brilliant and complicated young man so disturbed by the injustices of the world that he spends his young life developing a virus that will wipe out humans and replace us with a new species of hominid. The series not only looks at the events that lead up to that big moment, referred to in the books as the “waterless flood,” but also what happens after — including who and what shall inherit the earth."

Anyway Hulu's been yapping about making this for awhile, we'll see if anything happens. The annoying thing is is that Atwood was clearly ahead of her time fifteen years ago, but now by the time Hollywood gets around to it our times are catching up with her prognosticating. Pretty similar to how she put The Handmaid's Tale out in 1985 and then twenty years later the TV series felt like Current Events. On that note this article also mentioned the news that The Handmaid's Tale will have a fifth season; for some reason I thought the upcoming fourth season (premiering on April 28th!) was the show's last. But they're gonna plug on. I like the last season more than most people seemed to but I do sort of wonder if they might not be pushing their luck. Will the show still feel so vital without a Trump in the White House?
Who? Jason Adams When? 11:56 AM