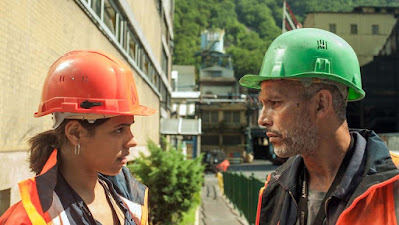 What is it that's so compelling and cathartic about a good environmental crisis thriller? I speak of the Silkwoods of the world, the Erin Brockovichs -- the "normal person takes on an evil polluting corporation" films where we watch someone uncover the horrors done to an entire community in the name of greed? I guess it's the Goliath-hater inside all of us, and in this case probably fed by the white hot panic stirring inside us every day as we turn on the news and see more cancer, more climate change, and feel helpless. They're stories of our moment with a solid villain and an infuriating process that gets in the way -- the unraveling of which can be, in the right hands, hella cinematic and thick with heady revenge highs.

Screening as part of the "Rendezvous with French Cinema" series here in NYC for the next ten days Farid Bentoumi's film Red Soil is just such a film, and should be set right astride the best of the genre -- it's better than Todd Haynes' 2019 well-shot but muddled stab at it with Dark Waters anyway, and if you can do something better than Todd Haynes I'd say you're doing a damn lot right. Red Soil tells the true story of a nurse named Nour (the tremendously transfixing and empathetic Zita Hanrot) who goes to work at her father's chemical plant, only to discover that the place is a death trap.

Per usual Nour is met with mountains of red tape, but Red Soil is smart to make Nour's father Slimane (played by the terrific Sami Bouajila) the primary force walling her off -- watching their sweet relationship fracture due to his stonewalling, all in the name of his paycheck, is heart-rending; in the way of all good familial dramas (think of it akin to Asghar Farhadi's output) you can see and feel both sides, to a sometimes excruciating degree. Not that it's not clear who's in the right here, but Bentoumi makes it clear that being "right" has huge casualties of its own. There are no simple paths in the disassembling of societal structures, especially ones so enmeshed with the fabric of a community as this one.

Everyone in this town works for the plant -- everyone in this town also stands to get deeply sick due to it, too. And the film isn't afraid of facing the question at the heart of people put into these situations, which is "Is my life worth more than this?" A lot of people just simply don't think so, so beaten down has the system made them, and so they accept their own exploitations in exchange for a home for their families. We'll gladly step into the meat-grinder as long as what comes out can keep the people we love fed. Red Soil makes enthralling drama out of one family forced to measure their future, their worth, and how we should all number one top of the day just look out for one another whatever the consequences. 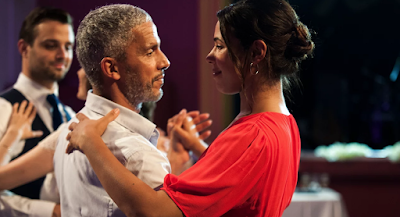