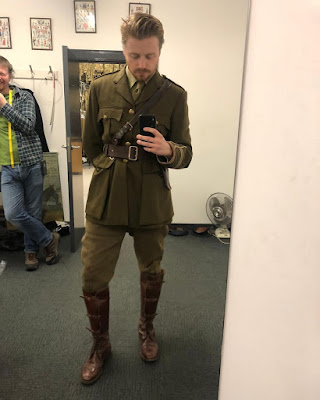 Actor and Saoirse-beau Jack Lowden this morning shared this photo of his latest costume fitting for Terence Davies' upcoming biopic Benediction, about the poet and noted homosexual Siegfried Sassoon -- we've posted on this film a couple of times previously, to announce it here and then to share the first official photo from it here. That second link also came with a few set photos, including ones of Jeremy Irvine, who's playing the actor and also noted homosexual Ivor Novello and yes, one can assume their affair figures prominently into the story here, since I have faith the openly gay Terence Davies won't let us down. Anyway I am surprised filming is still happening on this -- those early set photos were from November! Quite the shoot!
Who? Jason Adams When? 11:37 AM

Let's hope the movie will show him with the uniform and under garments off.