Jack of All Trade 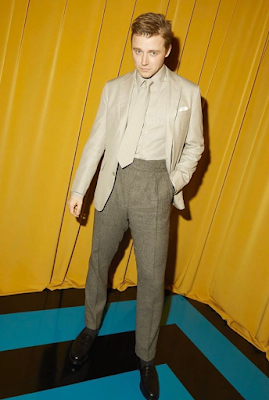 I can't believe I haven't mentioned this week old news yet! Well I suppose I sort of can since I was sick for half of last week. But still. I would have dragged myself out of my sick bed and typed this in germ-stained fingers if I was really worth anything. Alas! We'll try to make amends now, too late, always too late... and yes I'm still a little bit sick and feeling mighty melodramatic this afternoon, why do you ask? Anyway to finally make my way towards the point the actor and all-around handsome lad Jack Lowden, seen above (via), has signed on to star in the new movie Benediction from the director Terrence Davies, whose last movie -- the 2016 Emily Dickinson biopic A Quiet Passion -- I thought quite lovely. And Davies is taking on another gay ass poet this time, with the British soldier turned anti-war crusader Siegfried Sassoon. Sassoon was married with a kid but had constant homosexual affairs, including one with the famous actor Ivor Novello, someone we've displayed you know an interest in before...

Why yes thank you @tcm
I could use a reminder
that Ivor Novello could get it pic.twitter.com/7SRgXMDKTt
— Jason Adams (@JAMNPP) July 6, 2017