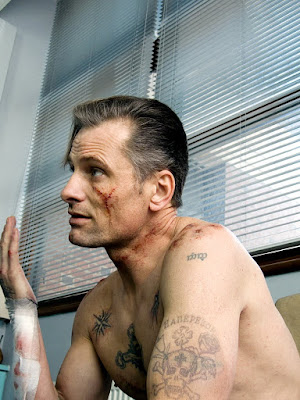 So I guess Viggo Mortensen's directorial debut called Falling, which I briefly mentioned back in September when I first saw the words "David Cronenberg is playing a proctologist," is hitting streaming on February 5th -- the movie has Viggo playing gay, which sounds fun; I will drop the trailer down below at the bottom of this post. I've very much been feeling the need to revisit Viggo's three-movie collab with Cronenberg as of late (A History of Violence, Eastern Promises, and A Dangerous Method) and it looks like that threesome's on the verge of foursome status (ooh la la) as Vigs says in a new GQ interview the two are maybe probably about to film a new movie this summer! And even better Cronenberg's allowing usage of the long gestating words "Body Horror" to boot:

GQ: Are you two in talks for another collaboration sometime soon?

Viggo: Yes, we do have something in mind. It's something he wrote a long time ago, and he never got it made. Now he's refined it, and he wants to shoot it. Hopefully, it'll be this summer we'll be filming. I would say, without giving the story away, he's going maybe a little bit back to his origins.

Viggo: Yeah, it's very interesting. It's almost like a strange film noir story. It's disturbing and it's good, I think. But since his origins, he's obviously developed in terms of technique and self-assurance as a director.

This would be Cronenberg's first movie in seven years, since Maps to the Stars in 2014, so we're seriously overdue this. Then you add in the fact that the last movie Cronenberg made that could be described as "Body Horror" (a hot-as-hell horror genre of the moment that he basically invented, as far as I'm concerned) would be eXistenz all the way back in 1999...

... and you could say we're SERIOUSLY SERIOUSLY overdue this. I mean I have enjoyed his son Brandon's two films (Antiviral and especially Possessor) that've borrowed heavily off his last name, but it's about time the original violator of the new flesh came back and showed these kids how it's done. Anyway here's that Falling trailer:
Who? Jason Adams When? 3:08 PM
Labels: David Cronenberg, gratuitous, horror, Jude Law, trailers, Viggo Mortensen

Don’t forget A Dangerous Method! (easily #3 of the three collaborations, but still)

LOL I totally forgot about A Dangerous Method! Good grief, how dare I