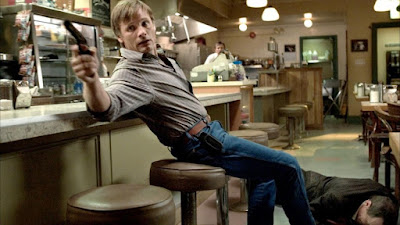 Mick: Yeah. She used to have these crazy goddamn
dreams where instead of her boyfriend, I was some kind
of demented killer. I woke up one night,
she stuck a goddamn fork in my shoulder.
Tom: You're kidding me.
Mick: Nope. I'm spurting blood. She's sitting
there crying, going, 'Baby, I love you, I love you.'
Tom: So, what happened? You broke up with her, right?
Mick: No, I married her.
Mick: Hey, it lasted 6 years. Nobody's perfect, Tom.
Tom: I guess not.

A happy 15 to David Cronenberg's A History of Violence, released on this day in 2005. I really have to go back and re-watch this, I haven't seen it since 2005 and I have a feeling I'll appreciate it more now than I did at the time -- at the time I was kind of annoyed that Cronenberg seemed to be stepping away from the horror genre, but now, in 2020, I think I'll just be happy to see any Cronenberg at all. Dude hasn't directed anything in six years! Please David, make another movie! Although...

Never have I wanted to see a movie more pic.twitter.com/mmdCtR8COZ

... we will supposedly be seeing Cronenberg on-screen playing Viggo's proctologist in Viggo's directorial debut called Falling, which also, on top of all that, has Viggo playing gay. (The film played at TIFF and I think got pretty bad reviews.) Anyway what are y'all's thoughts on A History of Violence? I know it was beloved by many at the time and my tepid opinion was an outlier, so please, take to the comments to tell me I was wrong.

do you remember the name of the 80's slasher flick about some teens that go on a canoe trip near a cabin in the woods and there is someone stalking them along the river hiding under a blanket disguised as cliffs/rocks? it was cheap but good.
ring any bells?