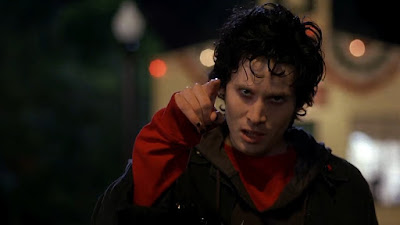 Ian McKinley: Equal... in death's eyes? All of us? How can you say that? Dude, think it through: Charlie Manson, made it to 70, Osama, still kicking. Pimps, vice presidents, walking around, all the atrocities they've committed, they're alive and well. These two girls, never done shit to anybody, they don't get to make it to 18. Where's the fucking equality in that?

A happy 15 to this movie! Lest you think the Final Destination franchise is nothing but eyeballs being gouged and spines popping like champagne corks that there's just one of the many ruminations on life and death and the cruel joke of existence contained therein -- this franchise is Bergman by way of Clive (and Carnival) Barker and it holds my heart in its thorny devil claws. Just the other day I was out of nowhere worrying the pandemic has hurt progress on the sixth film, which was announced before 2020 took a fire-axe to the world's plans -- I hope they're still planning on it. If any franchise should remain unkillable it's this one. Where does Part 3 fall in your FD franchise favor? I enjoy the hell out of all five films but my ranking is probably 2-5-1-3-4.

Oh god I forgot how great these movies were. Due for a rewatch.

1 is still the best and scariest
5 tried to actually bring more meaning to the story it presented
3 I think is great because Mary Elizabeth Winstead really sells every emotion. She's fabulous in it.
2's opening sequence is the best one out of the whole series and one of the best opening sequences of all time.
4 is just plain stupid lol.

I agree with Barry's ranking, and most of his comments; I'm good with the 4th installlment, however, even though it's probably the weakest of the bunch. There's still a lot I like about it. Maybe I'm just easy on the series as a whole -- hands down this is my favorite horror film franchise.