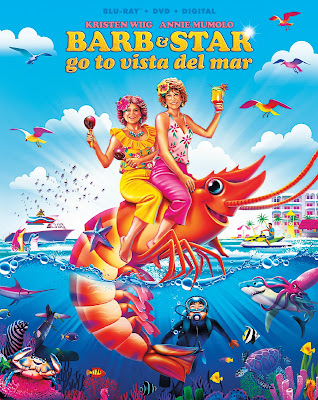 So how many of you have watched Kristen Wiig and Annie Mumolo's new viral-hit comedy Barb and Star Go To Vista Del Mar by now? If you have watched it but missed my review you can read my thoughts here -- basically I fucking adore it. I've watched it four, maybe five times now? It has invaded my life.

Yesterday I changed my ringtone to the ringtone in BARB AND STAR - the one that Wiig shakes her head to, which is prob the gag that's gotten the most chuckles out of me - and it just rang for the first time since and readers, I spit-taked my Dunkin pic.twitter.com/Qa7Z6eLVjf

It was just the exact silliness I needed right now. The world needed right now! I mean that's just my opinion, but my opinion, as you all know, is so often right. Anyway if you haven't watched it yet because 20 bucks is a whole heckuva lot to spend for a brief rental window -- believe me I get it, I got a screener and otherwise who knows -- there's excellent news for y'all, as they've just announced the film is hitting DVD and blu-ray on April 6th! It's also hitting digital (to own) two weeks before, on March 26th. Break out your favorite culottes cuz it's time for celebration!

I’ve seen it. Loooooved it.

I don't always enjoy comedies, but it was great. Warm hearted but not sappy, absurdist but also spot on with its social observation. The leads were fantastic, of course, but it was also fun to see Dornan play goofily sweet and vulnerable.

Jamie Dornan Killed it for me. He can't act. He can't sing and he can't dance. He hardly delivered his lines. I've recently watched him in another movie with Emily Bunt and good gods why is he still making movies? Whom is he sells ping with? He was terrible in the fall too. I haven't watched the 50 shades movies. What is the deal?

And I thought Jamie Dornan was really well cast. He seemed to understand both the movie's schtick and also his role in it. I dug it!

Watched the movie back when it first came out and, it's pretty over-the top 😏🤷‍♂️ Think Wiig & her co-star did a great job and they were on-spot as housewives from '80's or whatever.

I needed a good laugh and Barb and Star delivered. And Jamie Dornan dove right into his role and had was terrific.