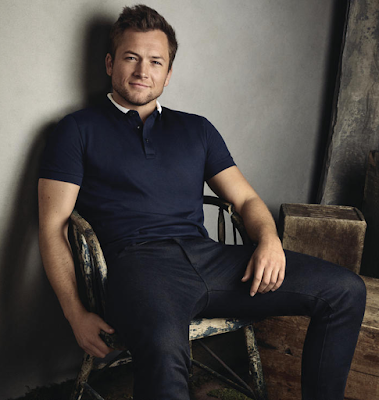 I was about to say "hot off his celebrated turn in Rocketman" but that was, what, one thousand months ago? I've lost tack of how time works. Anyway Rocketman's the last thing anybody saw Taron Egerton in and it was hot at the time -- especially when he listened to me dopily ask a couple of questions he's no doubt heard a thousand times and then posed for an awkward photo with me that once -- so the sentiment remains. Hot hot hot off Rocketman Taron's just signed up for a new project -- he's going to star in a six-part series called In With the Devil for Apple+ that will have him playing an ex-football star (!!!) sent to prison (!!!) who finds himself being used (!!!) in order to entrap another criminal (!!!). Unfortunately for all of those exclamatory marks it's not going to be that sexy probably, but it is being directed by Bullhead director Michael R. Rostkam, so maybe Taron will go the Matthias route and beef himself up for it. The role sounds beefy.