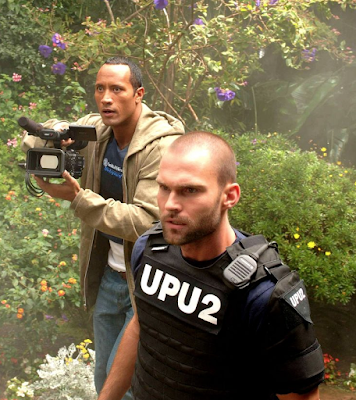 In the run-up to today's drop of Arrow's fancy schmancy blu-ray of Richard Kelly's mucho maligned 2006 flick Southland Tales -- which includes the also mucho maligned longer "Cannes Cut" of the film -- there have been approximately eleventy billion interviews with Kelly talking about the movie (this has been compounded by the 20th anniversary of Donnie Darko). Far more than I could ever begin to link to. Just google his name, they'll all come up, I promise. And I even watched the "Cannes Cut" a few weeks ago hoping I'd have something to say about the movie here. But... this movie, man. This movie still defeats my ability to say anything coherent about it. I both hate it and love it in equal measure -- it confounds me. I thought it might be better, 15 years on, but...

I AM GOING IN
WISH ME LUCK pic.twitter.com/qaCHHTdBnz

... no. Nope. Nada. I still just kind of sit there dazed by the thing. (By the way that tweet above, if you click over to Twitter, will give you a Twitter thread from December when I re-watched all three of Richard Kelly's movies -- Tales, Darko, and The Box -- within a 24-hour span.) I feel like I could make two columns, a Love and a Hate column, and diagram Southland that way, and maybe that flatness might approach the actual way Southland makes me feel, but then I'd be no better than the Jim Cunninghams & Kitty Farmers of the world, would I?

I love that Kelly got to make Southland Tales more than I actually love the experience of sitting through it -- it's always inspirational when batshit of its magnitude gets funded. I just don't think Southland, and what it is about, speaks to me like Darko did and does and forever will -- even The Box on this re-watch felt like it had more to tell me than Tales does. But if Kelly ever does get to make the sequel like he keeps saying he wants to in all of these interviews (he will not) I will be there opening night, that I promise.

I saw that first photo and wondered who gave Sean William Scott another job . . . .

"I still just kind of sit there dazed by the thing." For me, that's enough. I don't know that I'd have much to say about it either, but I'm happy it exists - especially the mega-zepplin sequence (I love the Rebekah Del Rio version of the anthem).

what version should I watch if I never saw this movie?

I haven't seen the original cut in 15 years so I can't really compare them, but if you're gonna go for it I'd say just go for it and watch the Cannes Cut -- I don't think either one seemed more coherent than the other