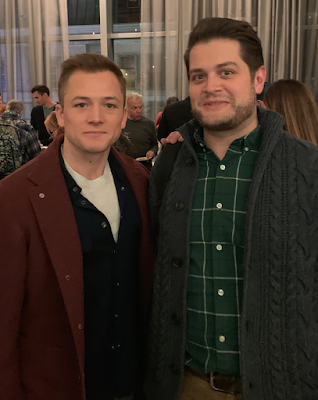 Well I'm usually loath to share photos of myself, especially mid-sentence and standing beside somebody as adorable as Taron Egerton, but whatever, you only live once and the internet hasn't murdered me just yet. I was worried I'd jinx myself when I mentioned on Monday that there was a Rocketman event happening this week but none such jinx materialized and whoa was me, sidled up against Taron last night. He put his hand on my shoulder! In all seriousness I only had a couple of minutes with him and I was per usual struck dumb within almost the entirety of that interaction -- I managed to sputter out that I've seen the film four times now and love it and he was obviously appreciative.
.

Here are a couple of shots I took of Taron Egerton (and #Rocketman director Dexter Fletcher there in the back!) working the room pic.twitter.com/hP0PESZgXt
— Jason Adams (@JAMNPP) November 13, 2019

.
Thankfully my boyfriend was there, and not just to take my picture -- he's actually good at the thing called "conversation" and brought up the first big party-scene in the film that really resonated with us (I mentioned it in my review) where the Sad Gay gets left all alone as all of his friends take off to hook up; who hasn't been there? And I'd never seen it depicted on-screen, at least in the context of the closet, before. Taron then told us a bit about an old roommate and good friend of his who is gay and how he (Taron that is) used a lot of their relationship, and what his friend was going through, for those moments of introspection and loneliness. Anyway he was lovely and I really hope he can keep himself in the Oscar talk, his work in Rocketman is some of the best acting we've seen this year. Oh and you can see one more photo on my Instagram... 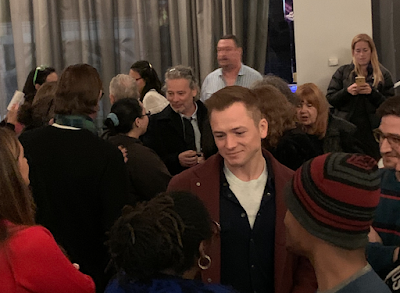 Such a dreamy guy!

Taron's not so bad either 😉😏