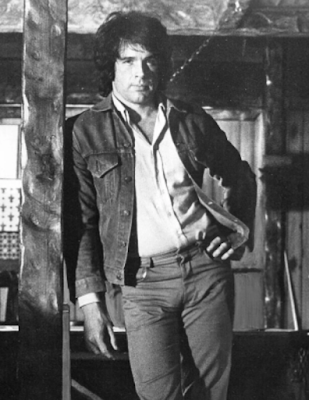 When I tell you that I watched Alan J. Pakula's 1974 conspiracy-thriller classic The Parallax View for the very first time this past May I do not want you to believe me. Because that was six months ago and here, in November of the same year, I am forced to admit that I remember exactly nothing about The Parallax View. I know I watched it. I tweeted about it. I listed it on the list I keep of the movies I watch. And yet... nothing. I should remember a movie that stars Warren Beatty in those pants. But I don't, and this fact calls into question whether I actually saw the film for the first time in May or if I've seen the movie dozens upon dozens of times and I just keep forgetting it. Maybe The Parallax View is my own Eternal Sunshine. Maybe some nefarious group from the future has been traveling back in time to erase me having watched it from the past. Is that actually the plot of The Parallax View? Damned if I know! 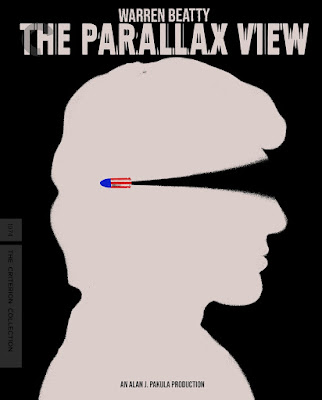 Anyway Criterion announced today -- OR DID THEY??? -- that they are releasing The Parallax View on blu-ray in February. We'll have to wait and see if that actually happens in February, or if time is a loop constructed by pin-headed communists from an alternate reality where everyone walks on the ceiling -- I'm not placing any bets either way. The other movies being released by Criterion in February -- two flicks from the fantastic Rahmin Bahrani (Man Push Cart and Chop Shop, both phenomenal), Ousmane Sembène's Sengalise Society Satire called Mandabi, and Joyce Chopra's fantabulous Joyce Carol Oates' adaptation Smooth Talk, which introduced the legend Laura Dern to the world. Speaking of beautiful men in well-fitting pants Treat Williams was really something in Smooth Talk... 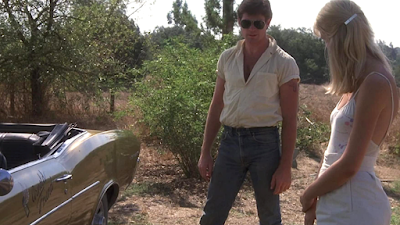 I will admit that I have watched Parallax View a couple times and have trouble remembering it as well. Perhaps because the plot is very dense I found it confusing at times, it's a lot to take in. In my mind it is grouped with All the President's Men and Three Days of the Condor and their brilliance always stands out above Parallax, maybe because they are more linear. I do remember Warren in those pants looking near his peak though!!

As far as Smooth Talk, well if you can't say anything nice.....

Smooth Talk is a masterpiece. This news made my day.

I watched the Parallax View 2 days ago for the first time. There is nothing to remember, one couldn't convey the plot because I doubt there really was one. The only thing to remember about the film is Warren Beatty, he had very few verbal script in the movie, but he sure looked great. That's it.

Parallax View was a very good movie, yes the plot is dense. It’s a product of its time, steeped in the aftermath of the Warren Commission and the other assassinations of the era. But I think the main reason people have trouble remembering it is that nothing is as it’s described, there’s a plot within the plot.

When I have asked people what they think the Parallax Corporation in the movie is about, they have all given the wrong answer, which is the same one Beatty’s character suspects.

Watch it again and ask what the Parallax Corporation is for. The hint is right in the name yet people are missing it.

To be honest, I’m not a big fan of conspiracy theories. I realize some probably are real but focusing on them just adds to general paranoia of the 20th and 21st Centuries.

But (Spoiler Alert) my problem with the movie goes back to the opening... if Parallax is so good at planning assassinations, why did they kill the senator in a public place with a large crowd. Then later they have to kill 8+ more people who “might” be able identify the the real assassin. Their whole operation is pretty sloppy. And all those other people dying afterwards certainly raises more suspicions. And Warren’s character was able to find evidence WITHIN A DAY of trying. Dumb!