Stabbed Thru the Heart & You're To Blame 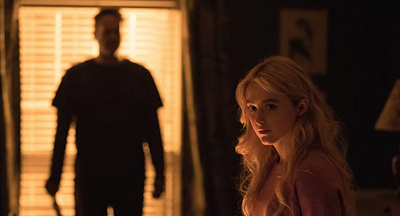 Most of the ingredients for Most Twu Wuv were there. The film's written and directed by Happy Death Day creator Christopher Landon, and I love me them Happy Death Day movies. I also really love the film's lead actress Kathryn Newton, always so very good as a sneering teenager, as seen previously on Halt and Catch Fire and Big Little Lies. And the basic idea at the heart of Freaky is an ace terrific idea! A serial killer called "The Blissfield Butcher" is all set to slaughter another teen girl victim (Newton) when the ancient sacrificial dagger he has somehow stumbled into the possession of -- I'd say it's a long story but it really isn't, it gets two minutes of exposition at best, which is for the best -- jumbos the ol' magical mumbo and their souls or selfhoods or whatevers get swapped. The Final Girl becomes the Killer, and vice versa. Force these two crazy kids to live in the other's shoes and learn valuable lessons about Victimization, and stuff!

This might sound at this point like I'm angry at the movie for not straining towards Deeper Meaning -- while I hesitate to put my own self into the shoes of an anti-Woke activist I could see one of those deeply deranged individuals shrieking, "Just let the movie be fun! Why ya gotta cram politics into a dumb slasher movie! Wah! Wahhh!!! I crapped my pants!" Et cetera. You know how those people are. Always crapping their pants. 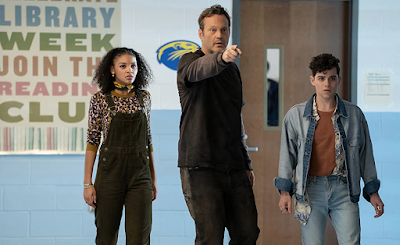 But while sure, I'd have liked the film to have been a little more thoughtful about its rich premise, by a smidge, that's not really my problem. My problem is the big vacancy in what I've referenced so far, and that's the actor who is playing the Blissfield Butcher -- one Vince Vaughn. Vince Vaughn is terrible in this film. Terrible. TERRIBLE. You watch a film like oh let's say just for shits and giggles classic 2003 body-swap comedy Freaky Friday, starring Linsday Lohan and Jamie Lee Curtis. A huge part of the joy of that film was watching Lohan act as if she's Jamie Lee and in watching Jamie Lee loose her inner Lindsay. That is the beautiful shining little diamond at the heart of Body Swap Movies. It's the reason for the season, dawg.

Vince Vaughn, once his character is supposed to be possessed by Kathryn Newton, plays Kathryn Newton as if he has never been in the same room not just with Kathryn Newton but with any teenaged girl in his entire life. I have no idea what he is doing. We spend time with Kathryn Newton in the first act, before they switch bodies, and whatever Vince Vaughn is doing has nothing to do with what Kathryn Newton had just done. He limps his wrist, he bats his eyelashes -- Bugs Bunny gives a more convincing portrait of femininity from under his Brunhilde Viking Helmet.

Vaughn isn't the film's only problem but he's the main one -- especially since the filmmakers clearly think he's hysterical and over-use him to the detriment of Newton's screen-time -- and his lousiness infects everything he comes into contact with. Whatever he's doing, being allowed to do, seems in general indicative of a laziness, a slap-dash quality, that Freaky is awash in. Freaky feels as if somebody came up with the idea for Freaky and then they filmed Freaky the next day. As if the script was written by people showing up to set and asking for their lines when the camera got turned on. The laughs come from people getting kicked in the nuts. The scares come from, I don't know, people being stabbed? A horror-comedy that's neither horror nor comedy: discuss. Or better yet don't. 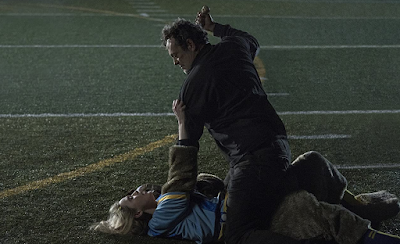