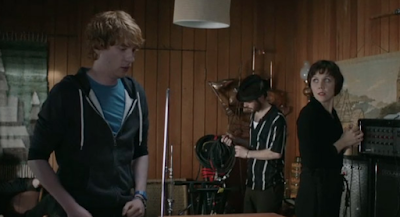 Jon: He said I was cherishable,
and he picked me to join the band.
Clara: You are fingers being told which keys to push.
Jon: I push my own keys...
Clara: Ten little bits of bone and skin.
Jon: And I'm perfectly capable of going to my
furthest corners and composing music.
Clara: Your furthest corners?
Jon: My furthest corners.
Clara: Someone needs to punch you in the face.

A happy 43 to Maggie Gyllenhaal today! I'm not even gonna mention her brother Jake (except, you know, that time right there) because Maggie's got plans, big plans, all her own this year -- we've been posting a ton about her directorial debut The Lost Daughter, which just finished filming a couple of weeks ago -- it stars Olivia Colman and Dakota Johnson and Peter Sarsgaard and Jessie Buckley and (our biggest reason for the multiple posts) new-BFFs Paul Mescal & Oliver Jackson-Cohen. And I don't mean to devalue her acting-wise -- she's always great, always. Maybe I should fiiiiinally watch The Kindergarten Teacher in her birthday honor? I've been meaning to for two years! What's your favorite Maggie?

The Kindergarten Teacher is great! I liked the movie very much and Maggie is tremendous in it.