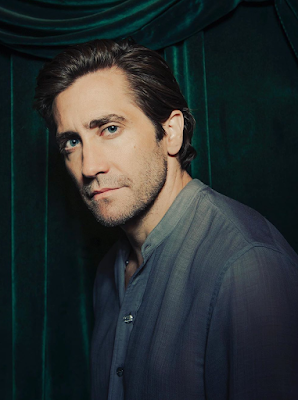 It's been so long that I'd one hundred percent forgotten about this project, but back in 2016 I told y'all that Jake Gyllenhaal was planning on adapting the Jo Nesbø novel The Son into a miniseries for HBO with his Prisoners and Enemy director Denis Villenueve. Well not that Jake was personally adapting the book -- who the hell actually knows if Jake can even write and read, and who cares? Somebody's writing the script though (actually we know who -- it's Lenore Zion, previously a writer on the shows Billions and Channel Zero and Ray Donovan) and now there's news that it's finally getting around to being a thing four years on with Variety reporting the series is moving forward with Villenueve directing, and Jake as the star! Cuz he's a Star, baby!

The Son is about a former wrestler... do I need to even continue? I don't like the sound of that word "former" though -- there need to be wrestling scenes! Lots of them! Lots of singlets! The people demand it! Anyway I will let somebody else tell you what the book's about, because I'm just gonna keep screaming the word "singlets" if I try:

"The Son follows a promising wrestler, whose life spirals out of control when his cop father commits suicide. He winds up in prison. When he learns truths about his father’s death, he makes a brilliant escape and begins hunting down the people responsible for his wrongful sentence."

Anyone read the book? Jo Nesbø is of course the author of The Snowman books that got turned into a fairly ridiculed Michael Fassbender property in 2017 -- and don't look at me, I didn't make a million "Harry Hole" jokes. Anyway. Did somebody say singlet?

I don't know. This seems like the kind of staid, colorless, middle-of-the-road drama that straight guys are drawn to that hold no appeal for me. The writer's previous experience kind of drives that home (I know people love Billions but I just couldn't care less).

And "former" worries me too - maybe there'll be flashbacks?