Nightstream: Hunted in 200 Words or Less 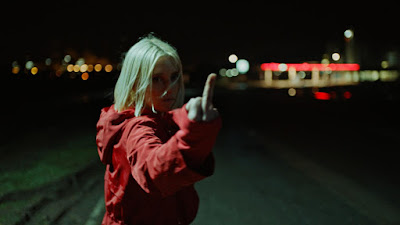 When Shudder properly releases Hunted next year you're going to see a lot of clever critics saying, "... And the hunter becomes the Hunted!!!!!!" and yes, this is me just wanting to get there first. Written and directed by Vincent Paronnaud, best known for the Persepolis movie, Hunted couldn't feel further from that film, although he does sneak in an early animated sequence -- it stars Lucie Debay as Eve (and yes, as with most female movie characters named Eve the name Means Something), a young working woman who through a series of increasingly unfortunate circumstances finds herself stuffed in a homicidal madman's trunk.

Sounds like something you've seen before, right? Well Paronnaud has got some wicked tricks up his sleeve, and Hunted is hella scary, gorgeously filmed, and even if it you can feel it now and then straining for it still manages to tap into something primal, dark, beastly. Arieh Worthalter makes for a hell of a villain -- repulsive but magnetic, pathetic but eminently watchable, and Debay matches him beat for fierce beat. You know a movie's working when my anxiousness can be heard down the block and I might've woken the neighbors with this one.

Hunted is streaming this weekend for the Nightstream Festival
over here, and will be released by Shudder next year.
Who? Jason Adams When? 1:44 PM
Labels: 150 or Less, Brooklyn Horror Fest, horror, reviews