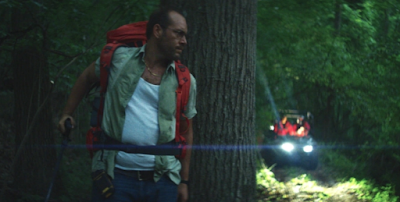 I think I speak for most of us when I say we are all a lil' bit Sisyphus in 2020, shackled as we are to ridiculous tasks which we don't fully comprehend and yet which nevertheless have no end. We've gotten miles off the plain old dirt, the concept of one plus one -- now pi runs on for literal ever and if you can understand what your computer's actually doing half the time I say good on ya; I'm blind as a bat. Flummoxed without a second to spare and not a whit to show for it -- I need nine days a week and even then no promises.

Writer-director Noah Hutton's new science-fiction myth film Lapsis, screening during the Nightstream Festival this weekend, introduces an ace allegory to set this feeling against -- in a world just a smidge in the future we meet Ray (Dean Imperial), a Gandolfini-adjacent middle-aged spread of a man who needs to scam up some money quick to help out his sick little brother. Even though he's a practicing Luddite he hears some get-rich-quick promises attached to the new techno-gig called "cabling," which has real live people literally dragging next-gen communication cables through the woods, from one gigantic magnetic cube to another miles away. Set up like an interactive game, a sort of Pokemon Godot, the longer course you chart with your wire through nowhere the more cash you make. There are even officious little robots you're expected to chase and compete with. It's an adventure!

Ray doesn't understand any of this and neither do we -- it is patently absurd. And yet, and yet, it seems just about perfect. It's a brilliant visualization of what existence feels like now -- we amass ludicrous tasks running towards preposterous goals, robot voices cheering us on, no idea how any of this is monetized or what it means, stuck in an infinite loop with nothing of substance to show for it in the end. Ray drags his spool of electric cables through the woods, a trail behind him as far as the eye can see, criss-crossing past others doing the same -- this web of wires covers everything, a hum in the air, and for what? Nobody knows.

That's the first half of Lapsis and the first half of Lapsis is very good, and very smart. The character of Ray turns out to be kinder and more complicated than he seems at first glance, and for that I was glad -- he easily could've slid into caricature but Imperial keeps him grounded and funny, even as the world exposing its insanity. Sadly the film's second half starts throwing too much at itself to see what will stick -- the workers are revolutionizing, there are hidden codes in kiddie videos and surprise daughter reveals; it's too much and the beautiful simplicity of its early ideas get lost among the last act chaos. I'd almost tuned out entirely by the time self-help tea ingredients were being hijacked. But before the machinery clunks and coughs and sputters out Lapsis hums, it hums real well. 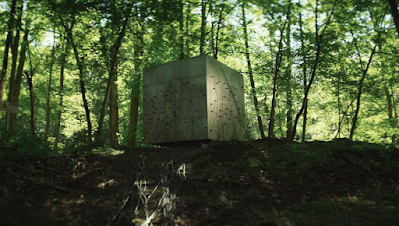