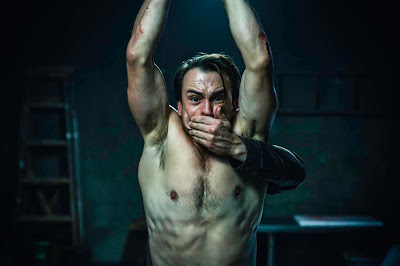 As part of this here ongoing Nightstream Festival  I watched an online panel (which featured our pal Final Girl Stacie Ponder!) that was on the subject of "Camp Horror" -- meaning Camp by way of Susan Sontag, not Jason Voorhees. And the panel got me thinking about a few things... not all of them being Stacie's Movie Shelves... one of them being: what would Straight Dude Camp be? The origin of Camp is mainly queer, specifically with regards to Gay Men; on the panel Stacie talked about her idea of Dyke Camp, and how that's a little different. But the riddle of Straight Dude Camp only riddled me for about two-point-five seconds, because I have seen Road House, and I have seen Road House many, many times. It's Big Muscles and Bigger Violence, a la any Schwarzenegger joint.

Bloody Hell isn't exactly that -- we're probably too self-aware in 2020 to go back to that place again -- but it made me think of that at times, and for that I thank it. I love me some Big Muscles and Bigger Violence, and Bloody Hell's got those thing sin spades. It stars Ben O'Toole and Ben O'Toole's carved-from-marble torso, both of whom are trussed up like Robert Conrad in Wild Wild West for half the film, and if I haven't sold you by now then I don't know my audience.

O'Toole plays Rex (see -- Rex is totally a Schwarzenegger character name) as a former Marine who in our opening scene thwarts a bank robbery in spectacularly violent fashion. Unfortunately for all hunked-up action-stars it's not the 80s anymore and violence is now freighted down with repercussions, and so Rex is sent to prison for his spectacular vigilantism. His case sparks a big public debate though, turning him into a media sensation, and so when he gets out of jail several years later the first thing he sees is his own face on the tabloid rag in a checkout line at the grocery store. 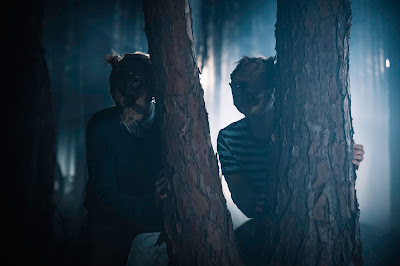 In a touch that feels lovingly borrowed from the Evil Dead movies -- which gave us Bruce Campbell as the hyper-aware action-figure of Ash, which is probably even closer to what Bloody Hell is gunning for than the earlier references -- Rex has a slight hint of a split personality, in that he sees himself outside himself and has conversations with this second self. Basically it's an excuse to give Rex somebody to talk to since he spends a good chunk of the film chained up in the basement of a Finnish serial killing family, but we're getting ahead of ourselves there. O'Toole is a big actor, and this gives him twice the maneuverability.

Okay, now's the time for the Finnish serial killing family. I won't spoil the fun of the A to B to Finnish serial killing family, but suffice to say that Rex ends up in Finland and in their basement trussed up like Thanksgiving, and must summon all the power of his crazy abdominals to get himself out of this situation. It involves kicking children in the face, romancing the local blonde pretty girl, an extremely juicy leg stump, and a scene I refuse to believe wasn't inspired by the jaw-dropping finale of my beloved 1981 slasher Just Before Dawn. Bloody Hell is a lot -- a lot of fun, a lot of gore, a lot of large rampaging pustules, a lot of that v-line that guys who're really in shape have... it's a lot! 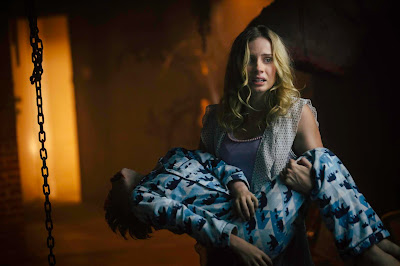