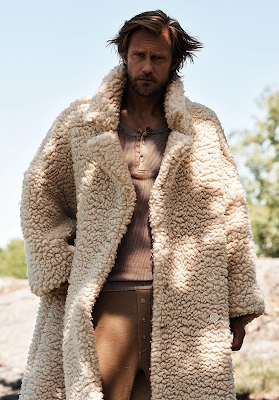 L'Uomo Vogue is really teasing our their Alexander Skarsgard content -- first we got the cover, then we got several of the photos, and today I've got two more photos plus a chunk of the interview itself, which focuses on his next movie and the thing we're most excited about -- Robert Eggers' The Northman, which'll have him playing a big bearded Viking-type, hence his look for this shoot. I thought it was interesting that Alex was trying to get a Viking Movie made for several years before Eggers came along, although that totally makes sense. Here's a choice bit from the portion of the chat that they've released online:

"It’s a real adventure movie, but it’s much more. It taps into the culture, and the mysticism of the Vikings, it becomes more intimate and more personal. I didn’t want it to be a generic “swords-and-sandals” movie. Robert is one of the best filmmakers out there. And the whole process is so much more gratifying than when you’re quote-unquote “just an actor”. It’s been truly extraordinary."

Since L'Uomo Vogue is in the business of printing magazines I don't think they're going to share the whole interview online, but I'm sure some kind soul will post it online when the issue's out. Until then read what we got and join me in staring dreamily at these photos... 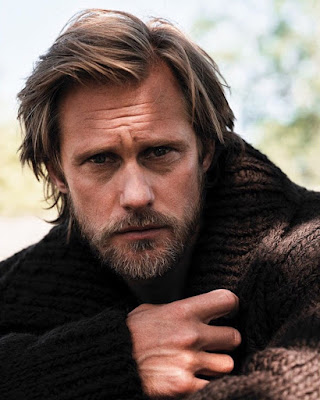