Cute Boys in Suits and Stuff 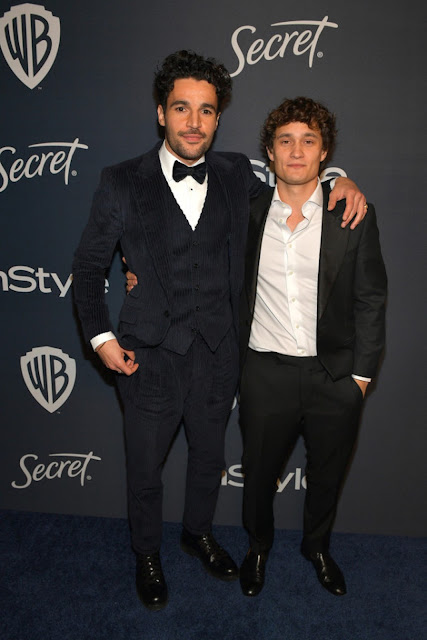 I was half-assedly (yes it's a word if I say so) looking for a photo to accompany this post and came upon this shot of actors Christopher Abbott and Rafi Gavron on the red carpet for what I presume was Catch-22 last year or whenever the hell that thing aired -- time? What is time? Anyway Rafi, as I have mentioned recently, is one of the actors in Hulu's new adaptation of Clive Barker's Books of Blood, which is out today -- not to mention Abbott is the star of Brandon Cronenberg's Possessor, which came out last week (reviewed here) -- so this picture works well enough for this post for me! (I love that they've got a "Secret" between them.)
Anyway the "point" of this post -- besides to remind you about Books of Blood -- is to tell y'all that today's another mid-week day-off for ol' Jason here as I try to play catch-up on my final batch of NYFF reviews as well as my first batch of reviews from the Nightstream Festival, which kicks off tomorrow. I wrote about that one right here if you missed it -- lots of horror goodies to talk about from there! Aaaanyway the longer this post goes on for the less of that work I am getting done, so bye.
Who? Jason Adams When? 11:54 AM