The Skins I Live In 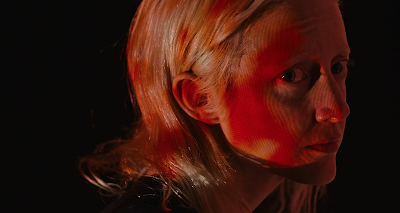 Think of consciousness as a slug, one that slithers under and through the meat of our animated carcasses. The slug is what animates them really, shooting off electric sparks as it slips and slides in between skin and bone, gristle pressing against its blind mole eyes, its lax tongue trailing behind. Anyway I think that's what dinner conversation at the Cronenberg Household sounds like, now that I've seen two films by David Cronenberg's son Brandon -- it feels like the meat of Possessor, his latest out today, is electrified by that base metaphorical assumption anyway.

The film drops us into its own central science-fictional conceit and expects us to play catch-up, but it's not too hard if you've been at this game long enough, the idea's simple -- Andrea Riseborough plays Tasra Vos (I see Brandon got character naming skills from his pops too), an albinic ex-wife and mother who for work puts on a large helmet and parasite-like invades a select person's consciousness, using that person's body to then murder someone close to that person for money. The host body she's taken over takes the blame for the killing, voila, everybody actually complicit walks away scot-free.

Tasra, while inside the other person's brain, is supposed to take their life once they've committed their crime, a safe-wall of attrition that keeps the set-up from being uncovered, but Tasra has begun to have some slippage once we meet her, and can't seem t pull that final trigger. Her own personal life's in shambles, and she seems to be finding a source of comfort and completion in Being Somebody Else -- although this is a real chicken or the egg scenario since we don't see her backstory; perhaps her life crumbled because she started letting her consciousness worm whore itself around all over. 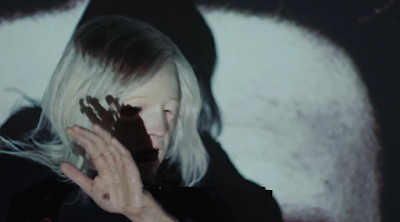 This all sounds real heady, har har, but in the grand Cronenbergian tradition Brandon turns Ideas into Matter -- Brain Matter that is. He makes meat of the situation! And so Possessor is the stickiest experience in any cinema this year, full of cameras traveling down throats and wounds in extreme close-up and more gore-goo than you'll find at any Halloweentown store at any outlet mall on the outskirts of any suburban village. If you're not into the sight of teeth being rearranged I respectfully warn you off.

Of course it's more than that -- like his father Brandon has adopted the intermingling of wet thick flesh with cold hard other-than; you know how the Brundle-fly at the end of the film The Fly has fully morphed into a quivering heap of steel slabs and hamburger sweat? Our deep mental, then turned physical, aversion to this co-mingle -- think also of the sexualized bodies twisted in car wrecks of Crash -- is the Cronenbergian sweet spot, and Possessor sneaks its sweet way around its own sort; we watch bodies melt and re-melt like wax in backwards time, beards and body hair sliming unnaturally -- it is beautiful and awful in beautiful, awful measure.

It's a big step up for Cronenberg Jr. -- I liked Antiviral but Possessor is its better in always; it's more assured of its ideas, more simple in its execution. It's weird to call a movie this weird "simple" but Possessor doesn't feel the need to obfuscate itself a la a Nolan movie in order to make itself profound; its ideas are already profound meditations on selfhood in themselves, and everybody works backwards from there -- including really terrific performances from Riseborough and Chris Abbott as the boy she takes over -- whittling it down to a sleek machine of maximum disturbance. 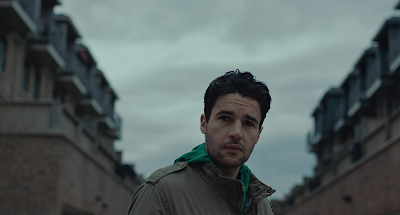