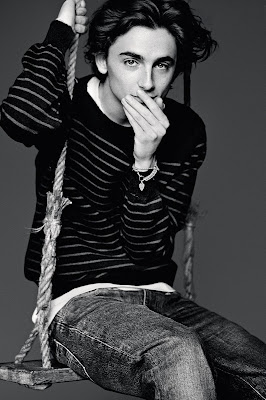 "We were going to do Bob Dylan with Mangold. That didn’t happen, with Timothee Chalamet about going electric in the ’60’s, and it would have been my third ’60’s movie in a row. ... Not right now. I don’t think it’s dead, but it’s a tough one to pull off in a COVID-era because it’s all in small clubs with lots of extras in period costumes, so you’ve got lots of hair and makeup."

-- That is the cinematographer Phedon Papamichael saying that Timothee Chalamet's Bob Dylan biopic isn't happening anytime soon, thanks to The Plague in a new interview with Collider -- he says that him and director James Mangold are moving on to the fifth Indiana Jones movie instead, and yes I had totally forgotten that Someone Not Named Spielberg was directing the fifth Indy, which I just talked about earlier. I'd even posted that Mangold news back in February -- alongside a pile of Sexy Harrison Ford snaps, I really recommend going back and getting lost on that link -- but... well that was February and some shit has happened between February and now so I have forgotten some things, okay? I apologize!
Anyway I was fairly indifferent (read: actively hostile) to the idea of Timmy doing a Bob Dylan movie myself, since I find Bob Dylan's singing voice practically unlistenable -- send your hate mail to Who Cares, c/o My Butt -- but Timmy seemed rather into it, talking it up a bunch in that big GQ profile we just got last week, so I wouldn't call this "dead" yet. Just delayed. We'll see. Or we won't! Whatever!
Who? Jason Adams When? 2:46 PM

Weirdly I like I’m Not There despite not giving two shits about Dylan. This Twink made make a great Dylan in a few years.