I always make a random new-to-me discovery or two when I do my "13 [Blanks] of Halloween" lists every year, and this year it's proving no different with our look at the Rats of Cinemas Past -- like who the hell knew there was a scene in the second Fast and the Furious movie (still hilariously titled 2 Fast 2 Furious) where the bad guy (played by the ever threateningly pretty Cole Hauser)... 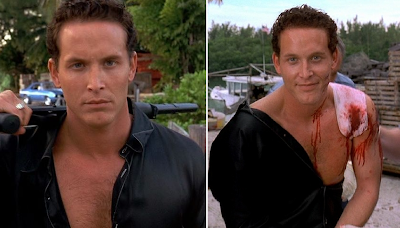 ... threatened an undercover cop (played by the ever threateningly hirsute-headed Mark Boone Junior) by trapping a rat inside a champagne bucket and holding it down to his chest while he then lit it the fuck up with a blowtorch? I sure didn't! But then I have never seen a single Furious film out of the what, dozen now, so I wouldn't have. Anyway in any case it's nice to see Paul Walker and Tyreese squirming on a sofa real close to one another, even if under such grotesque circumstances -- I'll take what I can get.
Who? Jason Adams When? 12:00 PM
Labels: 13 Rats of Halloween, Anatomy IN a Scene, especially random nonsense, gratuitous, Paul Walker